US evangelist Billy Graham dies at 99

The influential Southern preacher was a spiritual adviser to several US presidents and millions of Americans via their television sets.

Billy Graham, the American Christian evangelist who counseled presidents and preached to millions across the world from his native North Carolina to communist North Korea during his 70 years on the pulpit, died on Wednesday at the age of 99.

Graham died at his home in Montreat, North Carolina, according to Jeremy Blume, a spokesman for the Billy Graham Evangelistic Association.

Graham was a powerful figure when he preached in his prime, roaming the stage and hoisting a Bible as he declared Jesus Christ to be the only solution to humanity's problems.

According to his ministry, he preached to more people than anyone else in history, reaching hundreds of millions of people either in person or via TV and satellite links.

Graham became the de facto White House chaplain to several US presidents, most famously Richard Nixon. He also met with scores of world leaders and was the first noted evangelist to take his message behind the Iron Curtain.

Graham was no longer a close associate of presidents in his later years but shortly after the announcement of his death President Donald Trump said on Twitter:

The GREAT Billy Graham is dead. There was nobody like him! He will be missed by Christians and all religions. A very special man.

William Franklin Graham was born on November 7, 1918, into a Presbyterian family and was known as Billy Frank while growing up on a farm near Charlotte, North Carolina. As a teenager, he said he was mostly preoccupied with baseball and girls until he was moved by God after hearing a fiery revivalist in Charlotte.

Liberals accused him of giving credibility to abusive governments while fundamentalist Christians criticised him for going to godless countries and promoting peaceful relations with them. Graham said he simply saw the trips as apolitical opportunities to win souls for Christ.

Graham helped bring religion into the television age. He first put together a television show, which was eventually syndicated, in 1951, and began live broadcasts of his revival meetings in 1957 from New York's Madison Square Garden.

In addition to suffering with Parkinson's disease for many years, Graham's health problems in his later years included a broken hip, a broken pelvis, prostate cancer and installation of a shunt in his brain to control excess fluid. He was hospitalised in 2011, 2012 and 2013 for respiratory problems. 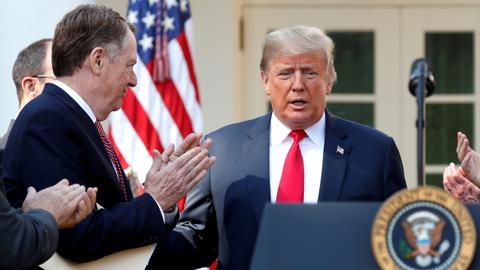 US lawmakers head home amid impasse over Trump impeachment trial