Democrats who control the House approved the measure authorising House committees to file lawsuits in federal court seeking orders from judges to compel officials to cooperate with congressional inquiries.

Congressional Democrats on Tuesday rammed through a resolution that makes it easier to take legal recourse against Donald Trump's administration, intensifying their standoff with the president over subpoenas related to the Russia interference probe.

The Democratic-led House of Representatives voted along party lines to adopt what they are calling a "civil enforcement resolution."

It would allow them to bypass full House votes and more directly pursue cases in the courts, where the party has scored some victories against Trump.

The vote came a day after the Department of Justice struck a deal with Democrats to begin producing documents and other underlying materials from special prosecutor Robert Mueller's report that have been long sought by congressional investigators.

With the first of the documents already shared with the committee, the watered-down resolution now contains no mention of the word "contempt."

McGahn was the key source for Mueller's detailed description of at least 10 instances in which Trump appeared to try to obstruct the investigation.

House Democratic caucus chairman Hakeem Jeffries described the measure as "a civil contempt resolution" to help enforce subpoenas, but he signalled that Democratic leaders might be willing to put the brakes on legal action should the Justice Department uphold its side of the deal.

"If they continue to cooperate with us I would expect that we would not race to the courthouse," Jeffries told reporters before the vote.

House Judiciary chairman Jerry Nadler, who has signalled he wants to move swiftly to hold the Trump administration accountable, said Tuesday's action would help obtain documents and testimony outside the scope of the agreement with the Justice Department.

On Tuesday, he acknowledged the unprecedented nature of the move to allow House leaders to seek court action on subpoena enforcement without a full vote by the chamber.

"This has not been done before, but neither have we ever seen blanket stonewalling by the administration of all information requests by the House," Nadler told lawmakers.

Mueller did not formally charge Trump when he concluded his investigation in March, citing Justice Department restrictions, and left it to Congress to determine whether the president had committed impeachable offences.

House Speaker Nancy Pelosi again downplayed prospects of initiating impeachment proceedings against the president, saying only a minority of Democrats want to pursue it.

But while impeachment was "not off the table," the case for the president's removal would need to be "iron clad" before such action is taken, she told a Washington forum. 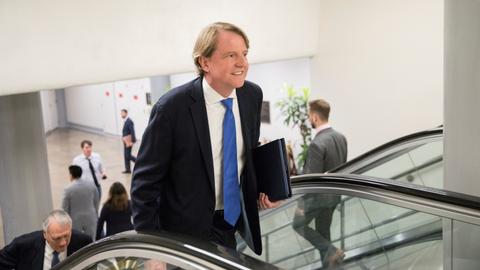