US Secretary of State Mike Pompeo and US Ambassador to the United Nations Nikki Haley warned against loosening sanctions on Pyongyang after Russia and China suggested the council could discuss such a move.

The United States called on North Korean leader Kim Jong-un on Friday to act on his promise to give up nuclear weapons and said the world, including China and Russia, must continued to enforce sanctions until he does so.

After briefing UN Security Council envoys in New York, US Secretary of State Mike Pompeo and US Ambassador to the United Nations Nikki Haley warned against loosening sanctions on Pyongyang after Russia and China suggested the council could discuss such a move.

The UN Security Council has unanimously boosted sanctions on North Korea since 2006 in a bid to choke off funding for Pyongyang's nuclear and ballistic missile programs.

US President Donald Trump and the North Korean leader met for the first time in Singapore last month and Pompeo followed up with inconclusive talks with North Korea this month. He reiterated on Friday that he had made progress.

Pompeo urges Kim to deliver on his promise

"Chairman Kim made a promise ... that he was prepared to denuclearise. The scope and scale of that is agreed to. The North Koreans understand what that means," Pompeo told reporters. "We need to see Chairman Kim do what he promised the world he would do."

Pompeo also called for an end to sanctions violations and Haley said the best way the talks between the United States and North Korea could be supported was by enforcing, not easing, sanctions.

"We can't do one thing until we see North Korea respond to their promise to denuclearise. We have to see some sort of action," Haley told reporters.

The United States last week complained to the UN Security Council North Korea sanctions committee that as of May 30, there had been 89 illicit ship-to-ship transfers of refined petroleum products this year by Pyongyang, breaching a UN sanctions cap.

It asked the committee to order a halt to refined petroleum exports to North Korea, but Russia and China put a "hold" on the request on Thursday and asked for more detail on the US accusation.

"We put pressure today on China and Russia to abide and be good helpers through this situation and to help us continue with denuclearisation," she said.

However, Russia's Deputy UN Ambassador Dmitry Polyanskiy told Reuters there was no reason for Haley to reproach Russia.

"We abide by all decisions. We just ask questions totally in line with sanction committee rules ... We didn't block anything - we put it on hold. She needs to study basics more."

China's UN Ambassador Ma Zhaoxu said China was committed to denuclearisation of the Korean peninsula and to the promotion of dialogue and negotiations.

"Everybody should fully implement resolutions passed by the Security Council," he told reporters after Pompeo's briefing. 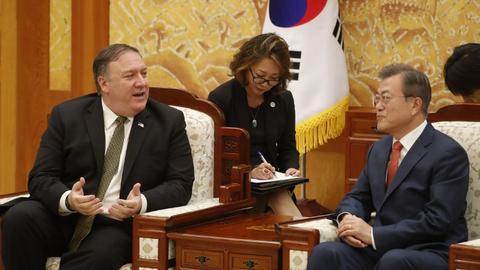 Mexico votes in referendum on accountability of ex-presidents