Its 500-plus-members, who include Maduro's wife and son, are led by Delcy Rodriguez, Maduro's former foreign minister.

A controversial new Venezuelan assembly packed with allies of unpopular President Nicolas Maduro held its first session on Friday, deepening a rift with the opposition and in the teeth of international criticism from the US, the EU and major Latin American nations calling it illegitimate.

The Constituent Assembly has supreme powers over all branches of government as it takes on its principal task of rewriting the 1999 constitution. It was elected last weekend in balloting marred by violence and allegations of fraud.

Its 500-plus-members, who include Maduro's wife and son, are led by Delcy Rodriguez, Maduro's former foreign minister.

They took their seats in an ornate oval chamber under a golden dome in the 145-year-old Legislative Palace -- in the same building where the opposition-dominated National Assembly is located, albeit in a different room.

"Today is a magnificent day," Rodriguez, 48, said to applause. "I want to thank Maduro for having stirred the wise powers of the Venezuelan people."

She rejected what she called "foreign interference" in the new assembly's creation.

Maduro on Friday said his armed forces should prepare in "non-traditional combat methods" as they confront an "armed insurgency" as the country reels in political turmoil.

At least 125 people have been killed in the unrest.

Speaking at a military event to celebrate the 80th anniversary of Venezuela's National Guard, Maduro also lambasted Venezuela's prosecutor's office, though he did not mention chief prosecutor Luisa Ortega by name.

Maduro said that if the prosecutor's office had, "acted courageously according to justice, all of these guarimberos (referring to violent opposition demonstrators) and criminals would have been captured, punished and imprisoned a long time ago."

The Constituent Assembly has discretion to dissolve the National Assembly. Such a move, however, would fuel criticism of it as a rubber-stamp body for Maduro, who critics say is building a "dictatorship."

The assembly's members were accompanied to the palace by Maduro and thousands of supporters carrying portraits of late president Hugo Chavez.

"The people today are going back to the assembly building and will never leave," said one supporter, 72-year-old Euclides Vivas.

The opposition staged protests in the capital on Friday, but there were no signs of the street violence of the past four months that has left a death toll of more than 125.

The Vatican on Friday had urged the assembly's session not be held, saying it contributed to "a climate of tension" in Venezuela.

Ledezma and another opposition figure, Leopoldo Lopez, had been taken from their homes to military prison on Tuesday, reversing earlier home detentions.

Lopez remains incarcerated, one of hundreds of people who the opposition says are political prisoners.

The Constituent Assembly marks a new stage in Venezuela's rule.

Maduro claims the revised charter will yank Venezuela out of its political and economic crisis, though he has not detailed how. Nor has he given an end date for the Constituent Assembly, which he said would operate for years.

The body is being challenged on several fronts.

Backing opposition allegations of fraud, Smartmatic, a British-based company involved in the vote technology behind the election last Sunday, said the official turnout figure had been tampered with and exaggerated by at least a million voters.

Although brushed off by Maduro as part of a plot by "the international enemy," Venezuelan Attorney General Luisa Ortega -- a thorn in the president's side -- ordered an investigation.

She said prosecutors had lodged court cases seeking to have the Constituent Assembly annulled, though few in Venezuela believed that would happen -- and the new assembly could also fire her as one of its first actions.

Maduro has lashed out at several of the 40 countries that admonished him for seeing through the creation of the new assembly.

After being hit directly with US sanctions and called a dictator by US President Donald Trump, Maduro said defiantly that he was standing up to "imperialism."

But Maduro is fighting against a broad international tide, even if he has support of Russia -- which holds billions in Venezuelan debt -- as well as the leftist governments of Cuba, Bolivia and Nicaragua.

On Friday, Panama said it was giving asylum to two opposition-appointed judges sheltering in its Caracas diplomatic mission who are among 33 the legislature named last month to a parallel supreme court.

Five other shadow judges and another Venezuelan opposition figure are being given diplomatic protection, though not asylum, in Chile's embassy.

The uncertainty and unease surrounding the path Maduro has set Venezuela on has been reflected in an accelerated collapse of the country's already debilitated currency.

The bolivar lost 20 percent of its value against the dollar on Thursday, placing scarce imported food and medicine even further out of reach of impoverished Venezuelans. On Friday, it lost another 12 percent.

But the president enjoys the backing of the military, as well as judicial and electoral authorities, allowing him to forge on.

"More than changing the constitution, the main goal is to govern without limits," said an analyst, Benigno Alarcon. 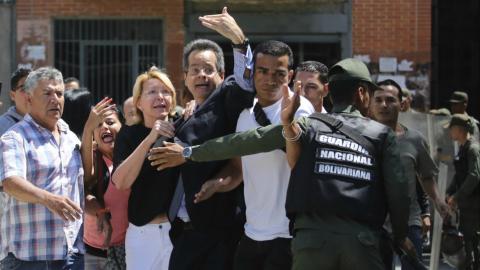