West-backed Guaido out as Venezuela prepares for new parliament

Guaido boycotted the December 6 polls, losing the limited institutional legitimacy he had and leaving foreign governments backing his claim to the presidency in a difficult position.

A new Venezuelan parliament will be sworn in with the party of President Nicolas Maduro now in almost complete control and the main thorn in his side, opposition leader Juan Guaido, out in the political cold.

Venezuelans have lived almost two years with both men laying claim to the presidency, but with Maduro subject to Western sanctions and Guaido recognized as the country's legitimate leader by the United States and more than 50 other nations.

In a move some criticized as a strategic error, the opposition led by Guaido boycotted December 6 legislative elections that returned a large majority for Maduro's party.

This means that on Tuesday, Guaido will be out of his job as National Assembly speaker, losing the limited institutional legitimacy he had, and leaving foreign governments backing his claim to the presidency in a difficult position.

"I do not think that this duality (of power) will continue for much longer," said Benigno Alarcon, director of the Center of Politics and Government at Venezuela's Andres Bello Catholic University.

Maduro, he said, "has control of the country through force" and a firm grip all state institutions.

This means, among other things, he could use Covid-19 restrictions on movement to ban any possible protests against his rule.

At the same time, Guaido is faced with increasingly feeble opposition mobilisation.

A referendum-style consultation called by Guaido and held over five days in December for people to condemn the December 6 vote and Maduro with it, failed to muster the large numbers of opposition supporters that participated in the protests of 2019.

"It is very likely that... Guaido will remain an opposition leader in exile," said Rafael Alvarez, analyst at the firm Iuriscorp.

On January 23, 2019, Guaido proclaimed himself interim president before a large crowd after the then-opposition controlled parliament branded Maduro a "usurper" fraudulently reelected in May 2018.

This step marked a turning point in the political crisis in recession-hit Venezuela.

It unleashed fresh protests against Maduro, and Guaido's popularity soared to around 80 percent, according to polling firms such as Datanalisis.

But the president refused to cede, and the standoff continues to this day.

In December, the opposition-led National Assembly passed a decree allowing itself to continue functioning in parallel with the new Maduro-majority chamber until fresh elections are held in 2021.

But political scientist Jesus Castillo-Mollendo said the unilateral ruling has no basis in law.

Nor does it seem to enjoy much popular support, added Alarcon.

"Inside Venezuela, everyone knows that this position is more symbolic than anything, that there is no way of exercising it because there is no control of the institutions," he said.

What will Biden do?

Guaido insisted in a recent interview that he had no intention of leaving the country, despite threats of imprisonment.

All eyes now turn to the presidency of Democrat Joe Biden after the departure of Donald Trump, whose administration imposed heavy sanctions in a bid to force Maduro to leave, without success.

"We may see different strategies of approaching the crisis, without abandoning the pressure," said Alvarez of Biden's likely approach. 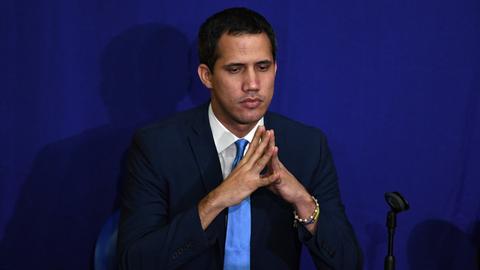 Guaido and rival both claim to be Venezuela's parliament speaker