What is the US Space Force?

As part of Donald Trump’s plan to reassert American dominance in space, the US Senate approved a bill, which includes the creation of a Space Force, the first of its kind in the US Armed Forces in more than 70 years.

The US Senate overwhelmingly passed a $738bn defence bill authorising several measures, including the creation of a space force. It was sent to the White House for President Donald Trump’s signature.

So what steps is the US taking to realise its new space force goals?

The new military branch in 70 years

With the new bill, the US will put more emphasis on space, with the creation of a ‘Space Force’, the sixth branch of the US Armed Forces. The new provisions won’t lead to a substantial restructuring of the military, unlike Trump’s initial plan. He previously said the US Air Force and the Space Force would be separate. But instead, the Space Force will be functioning under the already-existing US Air Force, which is in charge of national security in space.

This way, the establishment of the space force wouldn’t require a major change in its budget, as much of the space personnel working for the Air Force would be transferred to the Space Force, according to The Verge. With some senators objecting the bill due to concerns of overspending, the decision may be an effort to limit the budget.

However, the new force would also create a new title: chief of space operations (CSO), who would be responsible for reporting to Congress every 60 days about the new military branch’s implementation and establishment status for two years, Defence News says.

According to the website, the bill would also establish a position to work as a ‘senior space architect’, who will chair a space force acquisition council and then start serving as an executive.

Space war fighting would be overseen by an assistant secretary of defence for space policy.

Part of the Trump administration’s plan to strengthen space security

The passing of the new bill came as part of US efforts to reorganise the military’s space activity.

According to a Pentagon report in August 2018, immediate actions for creating a space force would be establishing a Space Development Agency, a Space Operations Force, and creating a US Space Command.

In late August, Trump launched US Space Command (also called SPACECOM) saying that it’s a step to maintaining US military supremacy in space, rather than merely existing there.

He’s most likely have been referring to the US’s main competitors, Russia and China, which were previously said to be investing in hypersonic missiles capable of evading US detection. Both countries also have military sectors dedicated to space.

The Outer Space Treaty, formally the Treaty on Principles Governing the Activities of States in the Exploration and Use of Outer Space. But the rules differentiating between militarising space and weaponising it is not very clear yet.

According to Johnson-Freese, a professor of national security affairs, who spoke to Space.com, the vast majority of satellites are being used both for military and civilian purposes. But the Treaty doesn’t specifically address certain issues such as what happens if a civilian purposed movement of a spacecraft’s manoeuvring justified by the treaty ends up colliding of another country’s spacecraft.

“There's a huge amount of grey area," Johnson-Freese told the Space.com. "I think there is a very large portion of the security community that is very happy for those ambiguities," she said.

According to Trump, these grey areas are being used by other countries against the US. 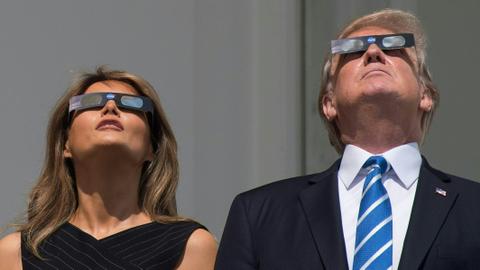 Five things you need to know about Trump's Space Force