Wolff is 'in every way comfortable' with Trump book

The author of a deeply critical book about Donald Trump's first year in office contradicts Trump's assertion that he had never talked to the writer for the book and had not authorised any access to the White House.

Michael Wolff's a provocateur who's said to love a brawl and once bemoaned the glare of the spotlight — and the bigger disappointment of watching it move on.

Obscurity is a threat to Wolff no longer.

His incendiary new book on President Donald Trump is drawn from what he said was regular access to the West Wing and more than 200 interviews, including some three hours with Trump himself.

It blew open what seems an inevitable feud between the publicity-loving president and his former adviser Steve Bannon, who is quoted extensively and unflatteringly describing Trump, his family and advisers.

Trump's lawyers sent Wolff and his publishers cease-and-desist letters, as they had to Bannon. Instead of halting publication of Fire and Fury: Inside the Trump White House, Wolff's publisher accelerated its sale to Friday, due to "unprecedented demand."

As of midday Friday, the book was No 1 on both Amazon.com and BarnesandNoble.com.

I authorized Zero access to White House (actually turned him down many times) for author of phony book! I never spoke to him for book. Full of lies, misrepresentations and sources that don’t exist. Look at this guy’s past and watch what happens to him and Sloppy Steve!

The author retorted on NBC's "Today" show: "I absolutely spoke to the president. Whether he realized it was an interview or not I don't know. But it certainly was not off the record."

Wolff said he spoke with Trump for a total of about three hours over the course of the campaign and after Trump's inauguration. He added that he has recordings and notes and remains "absolutely in every way comfortable with everything I've reported in this book."

"My credibility is being questioned by a man who has less credibility than, perhaps, anyone who has ever walked on earth," Wolff said.

Wolff has given Trump's allies fodder, particularly with an acknowledgement in the introduction that he could not resolve discrepancies between some accounts in a White House riven by rivalries.

"Many, in Trumpian fashion, are baldly untrue," Wolff writes of some accounts. "Those conflicts and that looseness with the truth, if not reality itself, are an elemental thread of the book." He says he "settled on a version of events I believe to be true."

For example, Wolff writes in the book that Trump didn't know who former House Speaker John Boehner was on election night 2016.

White House spokeswoman Sarah Huckabee Sanders disputes that, pointing to public photos that show the golf enthusiasts had hit the links over the years. Two people close to Boehner confirmed that and said they had spoken before and after the election.

Sanders also derided Wolff's contention in the book that Trump and his family had not wanted to win the election.

For his part, Trump went after Bannon in an unusual White House statement. Wolff and his publisher did not respond to a request for comment and an interview.

Wolff built his four-decade career writing about some of the world's rich and powerful people — including Rupert Murdoch — in seven books and across a wide range of newspapers and magazines.

Sometimes, he critiqued the media. And often, he got scathing reviews back on his writing style, his focus on atmospherics and his factual mistakes.

"One of the problems with Wolff's omniscience is that while he may know all, he gets some of it wrong," wrote the late David Carr in The New York Times, noting some discrepancies in dates in Wolff's 1988 book about Murdoch, The Man Who Owns the News: Inside the Secret World of Rupert Murdoch.

But Wolff was getting support from other corners. Janice Min, an owner of The Hollywood Reporter, tweeted that she was one of the few guests at a dinner reported in the book at Roger Ailes' house in January last year.

According to Wolff, Bannon discussed Trump's plans for appointing Cabinet and other advisers and Ailes warned him about the qualifications of some. "It's not a deep bench," Bannon acknowledged, according to the book.

So I was one of the 6 guests at the Bannon-Ailes dinner party in January 2017 and every word I've seen from the book about it is absolutely accurate. It was an astonishing night... pic.twitter.com/I4vgOrHOYb

The acrimony surrounding Bannon's very public break with Trump has escalated after the book’s excerpts were shared, suggesting a permanent split between the president and the pugilistic strategist who helped put him in the Oval Office.

The new fissure in an already fractious Republican Party cast doubt on Bannon's hopes to foment a movement centred on "Trumpism without Trump."

It already has cost him a key backer. Rebekah Mercer, the billionaire GOP donor and Breitbart co-owner, issued a statement Thursday distancing her family from Bannon.

"I support President Trump and the platform upon which he was elected," she said. "My family and I have not communicated with Steve Bannon in many months and have provided no financial support to his political agenda, nor do we support his recent actions and statements."

A parade of administration officials and allies worked to discredit Bannon as a disgruntled has-been.

Sanders went so far as to suggest that Bannon ought to be booted from Breitbart, the populist website he helps run.

"I certainly think that it's something they should look at and consider," she said.

Trump & Bannon have turned on each other BIGLY. It’s impossible to pick a side. It’s as if Cancer & Ebola got into a fight.

From Trump inner-circle to political outcast

Bannon had helped Trump form a coalition of anti-establishment Republicans, blue-collar working class and economic nationalists that launched him to the White House, but Trump had long ago grown frustrated that Bannon seemed to be overstepping his role as a staffer.

The self-appointed keeper of Trump's nationalist flame during the president's first six months in office, Bannon had soured on the president even before he was pushed out of the White House for feeding the perception that he was Trump's puppeteer.

None of Bannon's close associates was willing to speak publicly about the fallout but privately conceded that the explosive comments may forever tarnish his brand.

Bannon's political appeal had been deeply tied to the perception that he was an ally of Trump's. Those close to Bannon feared that the connection had been permanently severed.

Some Trump allies expressed satisfaction that Bannon appeared to be finally cast out of the president's inner circle.

Republican Senate Majority Leader Mitch McConnell, a longtime punching bag for Bannon, revelled in the aide's break with the president. "I'd like to associate myself with what the president had to say about Steve Bannon yesterday," he said Thursday.

Since leaving the White House, Bannon spent much of his time courting donors to help finance his self-declared war on the Republican establishment. He vowed to find Republican challengers for virtually every GOP senator seeking election this fall, chiefly for the purpose of electing candidates who would remove McConnell as majority leader.

White House aides have tried to look past other loaded comments from Bannon in recent months while seeking to marshal his political following on the president's behalf.

But they warned Bannon's allies over the last 24 hours that Trump would likely never take his calls again.

'Fire and Fury' author and publisher won't back down 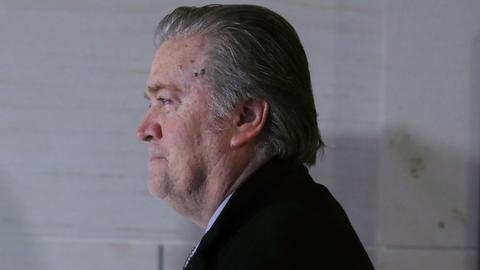 Bannon testifies before US House Committee on Russia links 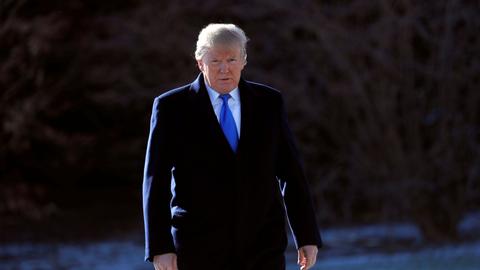