The 16th biennial, presented free of charge in three venues until November 10, centers around the notion of the seventh continent, the island of trash in the midst of the Pacific Ocean that is “five times larger than Turkey.”

The 16th Istanbul Biennial starts on September 14, and will run through November 10 this year, welcoming art lovers from around the world free of charge.

The art exhibition title this year is "The Seventh Continent," referring to the massive, island-like mass of trash in the middle of the Pacific Ocean. The biennial is informed by the Anthropocene, “[the] new geological era when the world is being reshaped by human activity,” as the exhibition Director Bige Orer writes in the foreword of the guide booklet.

The exhibition is being curated by art historian and curator Nicolas Bourriaoud, and encompasses more than 220 artworks by 56 artists and art collectives.

It will be presented at three venues: Mimar Sinan Fine Arts University Istanbul Museum of Painting and Sculpture, a brand new museum hosted in a former warehouse space by the Bosphorus; the Pera Museum in historic Beyoglu district; and Buyukada Island, the largest of the Princes’ Islands in the Sea of Marmara.

An ambitious art lover can do the two museums in one day, but Buyukada Island, accessible by ferry from both the European and Asian shores of the Bosphorus, needs another — leisurely — day of its own.

Better yet, set aside a complete day for the Mimar Sinan Museum, and visit Pera Museum on a separate day, coupled with brand new and impressive exhibition space Arter in Dolapdere, not too far from the Pera Museum. Arter, while unaffiliated with the Istanbul Biennial, provides a nice complement to the artwork on display there.

Speaking at the press conference for the biennial art exhibition, Chairman of the Istanbul Foundation for Culture and Arts (IKSV) Bulent Eczacibasi reminded the crowd that the biennial has been a part of Istanbul’s cultural landscape since 1987 and that “today, the Istanbul Biennial is one of the world’s most prominent contemporary art events.”

Eczacibasi added that “by the end of the biennial on November 10, we hope that hundreds of thousands of people will have visited the exhibitions, all of which are admission free.”

Koc Holding, Turkey's largest industrial conglomerate, has committed to sponsoring the biennial since 2007 up to 2026. Chairman of Koc Holding Omer M Koc mentioned the biennial theme, the so-called seventh continent.

“This mass of plastic in the middle of the Pacific Ocean formed of man-made waste covers an expanse larger than three million square kilometers in size,” he said.

“There is probably no better tool than art to describe the threat to our future caused by the great harm humanity has inflicted with its own hand on our world, our only source of life,” he added.

Curator Nicolas Bourriaud described the idea of the seventh continent as “a territory yet unknown, in which humans and non-humans coexist out of necessity,” one that is “not a continent there to invade and occupy by force [by European settlers], but inversely, a nation that formed behind our backs, almost without our noticing, born of our ways of life and production.”

He called it “the reverse-mirror of our societies, the seventh continent is the country we don’t want to inhabit, made out of everything we reject.” He said in order to apprehend the seventh continent, “we need the antennas of artists, its translators and anthropologists … You, as the visitors, need only immerse yourself … and you will be the anthropologists of this new world.”

Bourriaud also wrote an introduction in the guide booklet that touches on many of the themes of "The Seventh Continent." Noting that “‘us’ and ‘them’ are merely imaginary notions, the products of this or that ideology,” and therefore obsolete, he then talks about humans and nature.

“The Anthropocene raises a fundamental question,” he muses, “are we capable of living inside the world, rather than considering it a mere ‘resource’? Or will we persevere in our old habit of dividing it between ‘us’ and our ‘environment’?”

The artists featured in "The Seventh Continent" each attempt to bring forward a new voice to the table, to try to contribute to the dialogue between human and nature, between studier and studied. 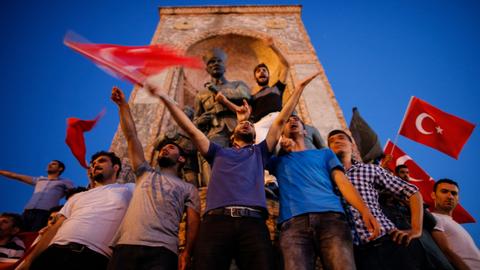 A night of defiance – Turkey remembers heroes of 2016 coup attempt