Anti-government protests swept across the country, has given Mohamad Alameddine a broader audience as protesters denounced the very same issues he had been drawing all along.

On the edges of a protest in Lebanon's capital, 24-year-old cartoonist Mohamad Nohad Alameddine bites through sticky tape and plasters one of his political sketches to a side wall.

"I haven't been able to work with newspapers, so instead I come down and stick them up in the street," says the unemployed artist, who graduated this year with a master's degree in press cartoons.

Until this autumn, Alameddine had been poking fun at his country's political and economic ills in sketches he posted online.

But from October 17, anti-government protests swept across the country, giving him a broader audience as protesters denounced the very same issues he had been drawing all along.

In public spaces, he and friends stuck up gags about failing electricity and trash management plans, as well as sketches mocking a political class perceived as corrupt.

In one cartoon, a skinny man stripped down to his underpants stands in front of a leader carried in on a gilded throne.

"We want your underwear to pay back the debt," says the moustachioed politician, clutching a lit cigar.

Now in the grips of a dollar liquidity crunch, Lebanon is staggering under a public debt of $86 billion.

Wherever there was a protest, "I'd go down and stick up a related cartoon," says Alameddine, who signs his drawings as Nougature.

"A lot of people encouraged me."

In late October, the government stepped down, but a deeply divided political class has yet to form a new one.

"Don't worry my love, I'd never leave you," says the character he has called President Nazeeh, dressed in a rabbit-themed pyjama onesie.

Alameddine says the fictional leader is his way of criticising the traditional ruling class without naming names.

"President Nazeeh headed a militia in the civil war and then became a political figure" after the 1975-1990 conflict, he says.

"We see how he deals with people, what he does under the table, what he says in public, how he manages corruption rings – but in a funny way," he says.

"In the end you want to laugh at what's hurting you."

On the other side of Beirut, 31-year-old Bernard Hage pens away at his digital drawing board, trying out his latest idea for a cartoon.

He says he gladly swapped a career in advertising for the arts several years ago, including drawing a stream of jokes under the name The Art of Boo.

In May, months before the anti-graft street movement, he drew a group of men in suits sitting in the lotus position in yoga class.

Hage says inspiration is everywhere in Lebanon, "whether you're in a taxi, at the vegetable shop or at the barber."

But the recent outburst of popular anger has amplified debate.

"I found my place in the revolution," says the satirical artist, who regularly posts on social media and draws once a week for a local newspaper.

"My role is to keep the conversation going, shed light on issues."

To celebrate one month since the protests began, he drew a vision for the country 10 years from now, featuring "things we'd like to hear in the near future".

On a page spread in French-language newspaper L'Orient-Le Jour, he imagined a world with smooth public transport and no daily electricity cuts.

"Daddy, what's a dijoncteur?" one girl asks, using the French word for the circuit breaker that trips before power outages.

A stick figure clings to a pole in a subway, as a voice overhead calls out the next stop in central Beirut.

To avoid offending anyone, Hage says he rarely names political leaders, and depicts them all across the board as besuited figures with little bellies poking out.

"I discovered there's a big gap between my generation and my parents' generation," he says.

"They lived through the war, saw death and were terrified by it – and it's not easy for them to leave that behind," or call out their traditional leaders, he says.

But he says it is time to put the younger generation in charge to fix the country's mounting woes – a polluted environment, a crashing economy, and high youth unemployment.

Otherwise, the cartoonist – also a musician and occasional writer – says he will follow his peers and emigrate.

"I'm learning German because, if this doesn't work out, I will leave and not come back." 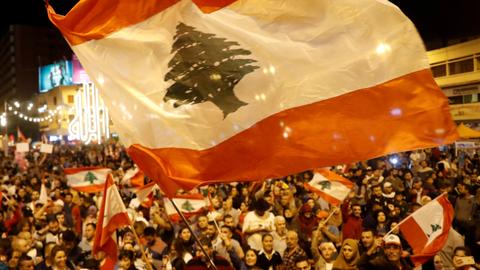 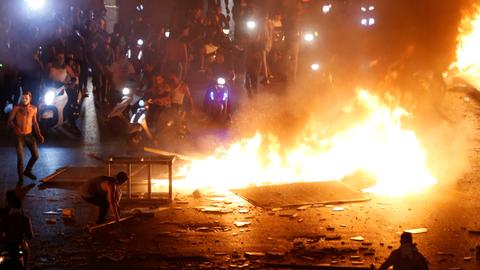