Hundreds of police, security agents and special armed forces are on stand-by amid fear of attacks at the Cannes Film Festival.

As stars arrive for the 69th Cannes film festival, which opens on Wednesday, security has been intensified to its highest protocol ever amid fear of attacks.

Some 400 security agents, hundreds of police and special armed forces are ready to deploy at a moment's notice, French Interior Minister Bernard Cazeneuve said on Monday.

"As we are about to open this festival and as I come here to check the security protocol, we are ... facing a risk that is higher than ever," Cazeneuve said.

"And against an enemy who is determined to strike at any time, we must be extremely vigilant at all times."

More than 150 people have been killed in terrorist attacks since November 2015 in venues across the country and with a crowd of 45,000 people expected at the event, nothing is being left to chance.

Cannes Lions, the creative organisers of the event says the protection level has been raised to four, making this the most security intensive film festivals ever.

The festival has experienced security breaches in the past. In 1975, a bomb exploded outside the main venue hours before the opening, and in 2014 two men were escorted off the red carpet after passing security.

The head of the Directors' Fortnight section of the festival, Edouard Waintrop says they have been forced to cut screenings.

"We will have exceptional security measures in place this year. We've lost 17 hours of screenings -- the equivalent to four films -- due to the new security protocols for gaining access to the cinemas.

"If the numbers have fallen this year, it's not out of choice but rather necessity," he added.

The Cannes Film Festival is the number one international market for first time films, multi-million dollar deals are signed every year, it boasts the largest international showcase of cinematic art and attracts in the neighbourhood of 27,000 film industry representatives and countless tourists. 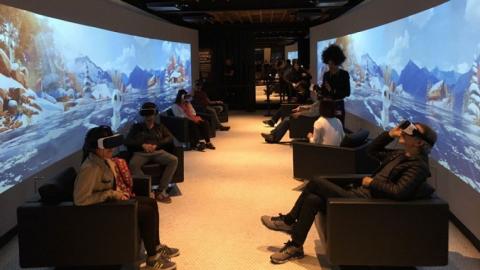