Walt Disney Co executive John Lasseter told company staff on Tuesday he was taking a six-month leave of absence following what he called "missteps" including unwanted hugs that made employees uncomfortable, according to a memo seen by Reuters.

"It's never easy to face your missteps, but it's the only way to learn from them," Lasseter said in the memo, in which he apologized to employees who felt "disrespected or uncomfortable."

"I especially want to apologize to anyone who has ever been on the receiving end of an unwanted hug or any other gesture they felt crossed the line in any way, shape, or form," he added. "No matter how benign my intent, everyone has the right to set their own boundaries and have them respected."

A pioneer in computer animation, Lasseter has been the driving creative force behind Disney's success in animated films over the past decade. He is an Oscar winner and chief creative officer of Pixar Animation Studios and Walt Disney Animation Studios.

Disney said in a statement that it appreciated Lasseter's "candor and sincere apology" and supported his leave of absence.

"We are committed to maintaining an environment in which all employees are respected and empowered to do their best work," the company said.

Lasseter, who heads animation at both Disney and Pixar, is the latest Hollywood figure to be accused of inappropriate behavior toward women since producer Harvey Weinstein was fired from his company in October after allegations of sexual assault and harassment. Weinstein has denied allegations of nonconsensual sex.

Part of Pixar's founding team in 1996, Lasseter has overseen 11 movies that have won the Academy Award for best animated feature, including "Up," "Finding Nemo" and "Frozen."

Disney animation and Pixar films have sold roughly $14 billion worth of tickets worldwide since Lasseter joined Disney, according to a Reuters analysis of data from the Box Office Mojo website.

Lasseter directed the 1995 hit "Toy Story," the first feature-length computer-animated film, which earned him an Oscar for special achievement, and has been credited with leading a resurgence of Disney Animation. The studio was revitalised with the 2013 musical "Frozen" and 2016 Oscar winner "Zootopia." 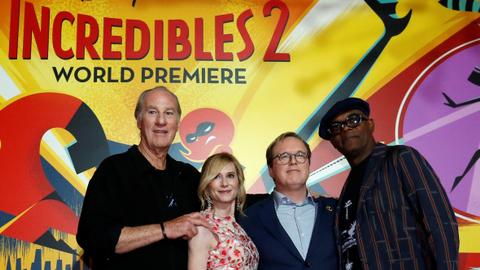