A coordinated assault targeting the defence minister and several lawmakers in Afghanistan's capital Kabul has ended with all attackers killed.

"The operation just ended. All the attackers were killed. A large number of people were rescued and the area is now secured," Interior Ministry spokesperson Mirwais Stanikzai told reporters after a wave of explosions and gunfire rocked the Afghan capital late on Tuesday.

A senior security official said the blast appeared to have been caused by a car bomb and the target was the acting defence minister's home and the adjoining residence of a member of parliament.

It appeared the target was the guesthouse of Defence Minister Bismillah Khan Mohammadi.

His Jamiat-e-Islami party issued a statement saying the minister was not in the guesthouse and his family had been safely evacuated.

The Defence Ministry released a video in which Mohammadi said that his guards had been wounded in a suicide attack. "I assure my beloved countrymen that such attacks cannot have any impact on my willingness to defend my countrymen and my country," he said.

The attack – in the heart of one of Kabul's most secure areas - came during an escalation in violence by the Taliban. Attacks have risen sharply since President Joe Biden announced US troops would leave by September even as the Taliban intensified its attacks on major cities.

A second blast hit near the National Directorate of Security (NDS) hours later with no initial death toll reported.

#FLASH#AFG defence minster has survived the car bomb attack on his residence & says "all is well." https://t.co/gA8bLRjBfX

Meanwhile, hundreds of civilians in Kabul came out on to the streets and chanted Allahu Akbar (God is Greatest) to express their support for Afghan government forces and opposition to the Taliban.

"The whole world can choose to be silent about what is going on in Afghanistan but we can't and won't stay quiet anymore...we will stand side by side with our security forces until our last breath," said a demonstrator in Kabul on condition of anonymity.

Last week residents in western Herat braved the streets despite nearby fighting to protest against the Taliban.

Other cities quickly organised to join the chant from their homes in the evenings, as a message of support for embattled security forces.

Clashes between Afghan forces and the Taliban have intensified across the country with the insurgent group gaining control over check points, trading posts and infrastructure projects.

Afghan forces earlier appealed to residents of the southern city of Lashkar Gah to leave their homes and stay away from areas where the Taliban fighters were taking control, as they intend to launch operations against the group where its fighters were travelling freely.

The loss of Lashkar Gah would be a huge strategic defeat for the government, which has pledged to defend strategic centres after losing much of the rural parts to the Taliban in recent months.

The Taliban said their fighters killed a district governor of central Maidan Wardak province on Tuesday, the latest in a series of killings by the insurgent group aimed at eliminating senior government officials and social activists. 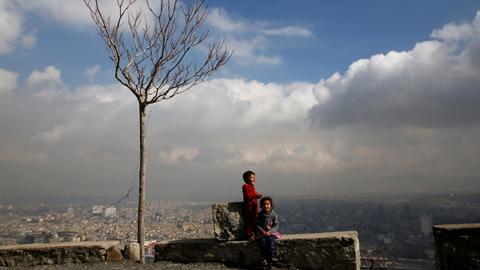