Every winter air quality deteriorates in Delhi and Beijing but local governments are unable to come up with long-lasting solutions.

A 26-year-old fashion blogger, Singh opened the bedroom window of her apartment in Delhi, India's capital, to catch some fresh air. Outside, it felt like a "blurry, wintery day."

"But it wasn't cold," Singh told TRT World. "I asked my mother what's going on — she said the air is polluted because people burned lots of firecrackers on Diwali."

In the coming days, a thick blanket of smog continued to hover above Delhi. Singh's eyes turned itchy and her throat went sore. She couldn't concentrate on work. At times, her vision became blurred, too.

By now, Delhi's air quality was deteriorating. People criticised the government for not doing enough to clean up the air in the nation's capital. Several hundred people gathered at Jantar Mantar, an authorised protest site, and demanded long-lasting measures.

Delhi's air quality index has now soared up to 999, a number much higher than the 500 mark, which is considered "hazardous." Sarath Guttikunda, the director of Urban Emissions, an independent research group, told the New York Times that constant exposure to such poor-quality air is equivalent to smoking 40 cigarettes a day.

Singh realised the government had no clue about how to tackle the crisis. On November 7, she drove out of the city and temporarily moved to Kasauli, a nearby resort town nestled in the green hills of Himachal Pradesh, a state in northern India.

"People with money can afford to get out, but what about the poor?" said Singh. "Bad air not only affects your lungs. It causes indigestion, kills your appetite, and slows down your brain function."

As with Delhi, the toxic haze of life-threatening pollutants has also returned to Beijing, the Chinese capital. Both the cities are jostling for the dubious number one spot in the world's most polluted cities chart.

The World Health Organization (WHO) released a report in 2012, saying that in the last eleven months, over a million people had died from pollution in China and 600,000 people in India.

The two countries so far haven't come up with any plausible long-term remedy as yet.

In Beijing, the government has announced a "yellow alert" - warning people to wear face masks and to keep a tab on the air quality rating.

What is causing the pollution?

In the last three decades, as the two countries increased industrial output, the number of coal-fired steel and power plants went up at an accelerated rate. The growing middle class led to the increase in the number of cars, trucks, motorbikes and air-conditioners, releasing considerable amounts of toxic gases.

As winter draws closer, the air quality will drop to dangerous lows. The smog accumulates in the air because of lack of rain and slow wind speed. Local governments in both Beijing and Delhi blame farmers from neighbouring states and provinces, saying they burn rice paddies to cultivate wheat, causing pollution. This, they argue, is the real cause of the pollution emergency, a claim many environmentalists reject.

How the governments have responded:

1. Last year, when smog engulfed the nation's capital, the first ever countermeasure came from the Delhi government: it announced an "Odd Even" policy that brought down traffic flow by allowing cars on the roads on alternate days, depending on whether the license plates ended in an odd or an even number.

2. This time, the Delhi government has closed 1,800 schools for three days and ordered factories and construction sites to stop work.

3. It's now considering cloud seeding — a scientific method through which silver iodide is blended with dry ice and then sprayed on a cloud from an airplane. The mix causes a brief spell of rain.

1. Between 2008 and 2014, the government implemented "Odd Even" scheme several times to reduce toxic emissions.

2. In 2012, after a dense cloud of smog draped over Beijing, the Chinese government rolled out a plan to cut back coal burning in major urban centres.

3. In 2015, the government issued a Red alert, closing down schools, factories and construction sites. Cars were taken off the road until pollution levels dropped below the "hazardous mark." This took two weeks.

Last year, Chinese artist Wang Renzheng walked on the streets of Beijing for five months, holding an industrial vacuum cleaner. He sucked up pollution particles through its nozzle and then turned them into a brick.

Similarly, Anirudh Sharma, an entrepreneur from India, captures carbon emissions from vehicles and produces black ink that graffiti artists use to paint walls.

Chai Jing, a filmmaker from Beijing, released a ground-breaking documentary film last year, Under the Dome, that examined how state-owned companies, steel producers and coal-run power plants, are the major sources of pollution. Within three days of its release, the film was viewed over 150 million times on popular networking site, Tencent, causing embarrassment to the Chinese government. The government was quick to ban it. 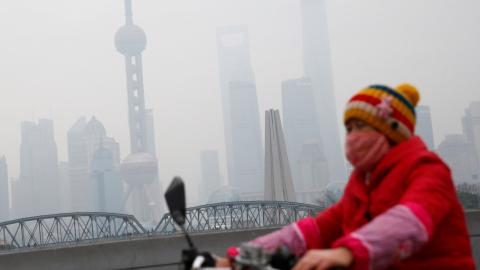 How bad is pollution in China?