An Australian court found the senior Vatican adviser guilty by a trial jury on one count of sexual abuse and four counts of indecent assault of two boys at Saint Patrick's Cathedral in Melbourne in the 1990s.

The most senior Catholic cleric ever charged with child sex abuse has been convicted of molesting two choirboys moments after celebrating Mass, dealing a new blow to the Catholic hierarchy's credibility after a year of global revelations of abuse and cover-up.

Cardinal George Pell, Pope Francis' top financial adviser and the Vatican's economy minister, bowed his head but then regained his composure as the 12-member jury delivered unanimous verdicts in the Victoria state County Court on December 11 after more than two days of deliberation.

The court had until Tuesday forbidden publication of any details about the trial.

The convictions were confirmed the same week that Francis concluded his extraordinary summit of Catholic leaders summoned to Rome for a tutorial on preventing clergy sexual abuse and protecting children from predator priests.

The jury convicted Pell of abusing two 13-year-old boys whom he had caught swigging sacramental wine in a rear room of Melbourne's St. Patrick's Cathedral in late 1996, as hundreds of worshippers were streaming out of Sunday services.

Pell, now 77 but 55 at the time, had just been named the most senior Catholic in Australia's second-largest city, Melbourne.

The jury also found Pell guilty of indecently assaulting one of the boys in a corridor more than a month later.

He faces a potential maximum 50-year prison term after a sentencing hearing that begins on Wednesday. He has foreshadowed an appeal.

Pell had maintained his innocence throughout, describing the accusations as "vile and disgusting conduct" that went against everything he believed in.

His lawyer Robert Richter had told the jury that only a "mad man" would take the risk of abusing boys in such a public place.

He said it was "laughable" that Pell would have been able to expose his penis and force the victim to take it in his mouth, given the cumbersome robes he was wearing.

Both he and Chief Judge Peter Kidd urged the jury of eight men and four women not to punish Pell for all the failings of the Catholic Church.

"You must not scapegoat Cardinal Pell," Kidd told the jury.

Pell, who walked to and from court throughout his monthlong trial with a crutch under his right arm, was released on bail to undergo surgical knee replacements in Sydney on December 14. Prosecutor Mark Gibson did not oppose bail, saying the surgery would be more easily managed outside the prison system.

Kidd warned that the continuing bail was not a sign that the 77-year-old would avoid a prison sentence.

The first four offences occurred at the first or second Solemn Mass that Archbishop Pell celebrated as leader of the magnificent blue-stone century-old cathedral in the centre of Melbourne. Pell was wearing his full robes — though not his staff or pointed bishops' hat — at the time.

The other victim died of a heroin overdose in 2014 without ever complaining of the abuse, and even denying to his suspicious mother that he had been molested while he was part of the choir.

Neither boy can be identified.

More than a month later, the complainant testified that Pell pushed him against a cathedral corridor wall after a mass and squeezed the boy's genitals painfully before walking away in silence.

"I didn't tell anyone at the time because I didn't want to jeopardise anything. I didn' t want to rock the boat with my family, my schooling, my life," the complainant told the jurors.

The complainant testified that he feared that making such accusations against a powerful church man would cost him his place in the choir and with it his scholarship to prestigious St. Kevin's College.

Pell did not testify at his trial. But the jury saw a video recording of an interview he gave Australian detectives in Rome in 2016 in which he stridently denied the allegations.

Pell grimaced, appeared incredulous, distressed, waved his arms over his head and muttered to himself as the detectives detailed the accusations that his victim had levelled against him a year earlier.

"The allegations involve vile and disgusting conduct contrary to everything I hold dear and contrary to the explicit teachings of the church which I have spent my life representing," Pell told police.

Richter, Pell's lawyer, had told the jury that the media had portrayed Pell as the "Darth Vader" of the church, referring to the "Star Wars" character.

The complainant testified that he and his friend had run from the procession and back into the cathedral through a side door to, as Gibson said, "have some fun." 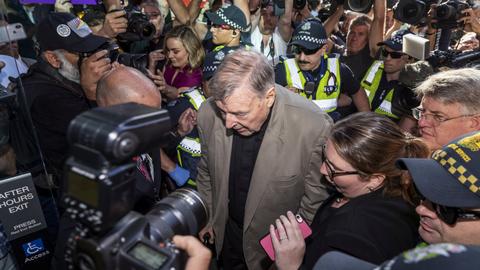 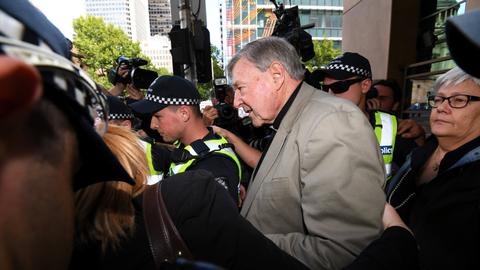