One member of the paramilitary Balochistan Levies Force and three men from a pro-government tribal militia are dead after a landmine exploded as their vehicle drove over it in Dera Bugti district.

Four security personnel have been killed in a landmine explosion in southwestern Pakistan, just days after 10 soldiers were slain in an ambush claimed by militants in the restive region.

One member of the paramilitary Balochistan Levies Force and three men from a pro-government tribal militia were killed on Friday "after a landmine exploded as their vehicle drove over it", senior government official Balach Aziz Baloch told AFP.

The official added that 10 others were injured in the incident in Dera Bugti district of Balochistan province.

He said the men were hunting thieves in the area, 350 kilometres (215 miles) southeast of the provincial capital Quetta, when they were "tricked" by militants into driving over the landmine.

Abdul Qudoos Bizenjo, the provincial chief minister, condemned the bombing and called it an act of terrorism. He vowed to make all efforts to arrest those who orchestrated the attack.

There was no immediate claim of responsibility for the attack. But local parliamentarian Sarfraz Bugti pointed the finger at the Baloch Republican Army, a militant group.

Insurgent groups have been waging violent independence campaigns in Balochistan for years, and Islamabad has deployed paramilitary forces in a bid to quell the unrest.

Balochistan is the largest, least populous and poorest province in Pakistan. It is rich in natural resources but locals have long harboured resentment, claiming they do not receive their fair share of its riches.

Friday's attack took place near the Sui gas field, one of the largest natural gas reserves in the nation.

On Thursday, the Pakistani army confirmed that 10 of its soldiers were killed in an attack claimed by another Baloch militant group, the Balochistan Liberation Army.

The men were gunned down when their checkpoint was ambushed overnight Tuesday into Wednesday, a statement said.

And last week, another Baloch militant group claimed a bombing in the eastern megacity of Lahore that killed three people.

On Thursday, night a member of the Balochistan Levies Force was killed in an attack claimed by the TTP in the town of Chaman, bordering Afghanistan. 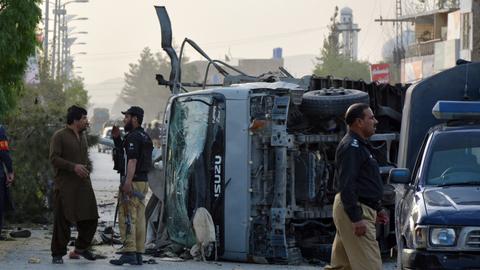