Sichuan's government says around 250 were injured in the quake, and tens of thousands of tourists evacuated. A second temblor hit Xinjiang province hours later, injuring at least 32.

Two earthquakes hit western and southwestern China on Tuesday. At least 19 people were killed in Sichuan province. In the autonomous region of Xinjiang, dozens were injured.

At least 19 people have been killed, including six tourists, and 247 injured in an earthquake that struck a remote and mountainous part of southwest China's Sichuan province, the local government and official media said on Wednesday.

The quake hit a sparsely-populated area 200 kilometres (120 miles) west-northwest of the city of Guangyuan on Tuesday evening at a depth of 10 km (6 miles), the US Geological Survey (USGS) said. The Sichuan earthquake administration measured the quake at a magnitude of 7.0.

The administration said the epicentre of the tremor was in Ngawa prefecture, largely populated by ethnic Tibetans, many of whom are nomadic herders. It was also close to the Jiuzhaigou nature reserve, a tourist destination.

The Sichuan government said 100 tourists had been trapped by a landslide following the quake. The official China News Service said on Wednesday that six tourists were among the dead.

In nearby Longnan in the neighbouring province of Gansu, also jolted by the quake, eight people died in landslides caused by heavy rain, the People's Daily said.

As many as 45,000 tourists have been evacuated from the quake zone, the official Xinhua news agency said on Wednesday morning.

The Sichuan fire service said the reception area in a hotel had collapsed, trapping some people, but that 2,800 people had been safely evacuated from the building.

There was no confirmation of the nationalities of any of the tourists, but Jiuzhaigou is far more popular with Chinese tourists than foreigners.

The earthquake came on the same day that state media reported heavy rains had killed at least 23 people in the province.

Extreme weather this summer has triggered a series of landslides and floods across China, leaving scores dead and tens of thousands displaced.

A strong earthquake of magnitude 6.3 struck a remote area of far northwestern China in Xinjiang region, about seven hours after Tuesday's Sichuan quake, according to the USGS. The country's earthquake administration said the second temblor measured 6.6.

The People's Daily said 32 people had been injured in the mostly rural area.

Wednesday's quake hit a sparsely-populated area of the Xinjiang Autonomous Region close to the Kazakhstan border, the USGS said. It said the epicentre of the quake, which struck at 7:27 am (2327 GMT on Tuesday), was located 137 km (85 miles) northeast of the city of Yining. 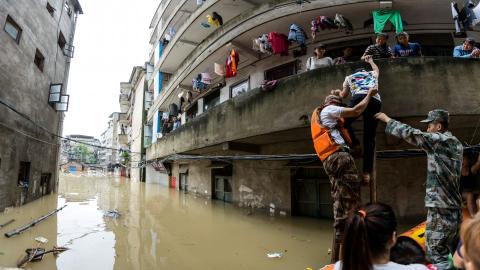