Fire kills several in market near Rohingya camp in Bangladesh

Blaze at Kutupalong, in which three people died, is the second fire at Rohingya refugee camps in Bangladesh in less than two weeks

A fire has destroyed more than 20 shops in a makeshift market near a Rohingya refugee camp in southern Bangladesh, killing at least three people, police and witnesses said.

Local police chief Ahmed Sanjur Morshed on Friday said they recovered the bodies from the debris after it took firefighters several hours to bring the blaze under control. Several other people were injured.

The fire broke out early Friday when residents of the sprawling Kutupalong camp for Myanmar's Rohingya refugees were asleep.

Sayedul Mustafa, the owner of a shop, confirmed the dead were his staff.

“We had five workers who slept in the shop but three of them were missing. Then after the fire was put out with water, we found one body first, then all three. Two people survived by the grace of Allah,” said Aneesul Mustafa, a Rohingya refugee and the owner's relative.

It was not clear how the fire began.

Aid agencies and the government had started rebuilding shelters after another massive fire last month left 15 people dead, 560 others hurt and about 45,000 homeless.

Authorities have sent about 13,000 refugees to an island in recent months, promising better life for more than 1 million Rohingya, most of whom fled Myanmar in 2017 in a major crackdown by the country’s military.

Bangladesh has hosted the refugees in crowded camps and is eager to begin sending them back to the Buddhist-majority Myanmar, but several attempts failed because the Rohingya refused to go, fearing more violence in a country that denies them basic rights including citizenship.

The repatriation effort was made even more uncertain in February, when Myanmar's military staged a coup and replaced the elected, civilian government that had been in office since 2016.

A Turkish military cargo plane departed for Bangladesh carrying materials for the reconstruction of a Turkish field hospital in Cox's Bazar district.

The plane was carrying medical supplies, tents, equipment for a 50-bed hospital and aid materials.

READ MORE: In pictures: The deadly fire that swept through a Rohingya refugee camp

The Turkish field hospital was one of the largest healthcare centres in the refugee camp, which is said to be the world's largest.

Another plane carrying 22 personnel from AFAD, Turkey's government-backed housing agency TOKI and the Ministry of Health along with aid materials had left for Bangladesh on March 27. 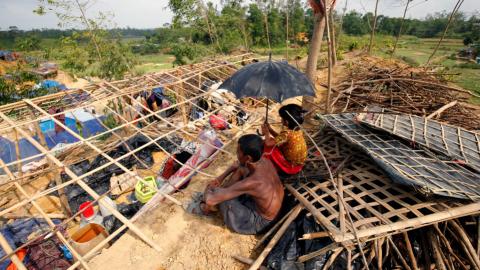