David William McBride appears in court on charges relating to the leaking of classified documents about Australian Special Air Service involvement in Afghanistan to ABC journalists.

A former Australian army lawyer charged with leaking secret documents to journalists said on Thursday his prosecution was not about protecting national security but concealing "a national shame."

David William McBride, 55, made his first appearance in the Australian Capital Territory Supreme Court on Thursday on charges relating to the leaking of classified documents about Australian Special Air Service involvement in Afghanistan to Australian Broadcasting Corp. journalists.

The leak was the target of a police raid on ABC headquarters in Sydney last week.

Police raided the Canberra home of a News Corp. reporter a day earlier in search for unrelated classified documents. The raids have been criticised as an attempt to intimidate media and have sparked complaints that the dozens of national security laws Australian governments have passed since the September 11, 2001, attacks in the United States have undermined press freedom.

McBride represented himself during his brief court appearance and was released on bail to appear in court next on June 27.

Prosecution lawyers lodged an 11-page application for classified parts of th e evidence to be heard in closed court.

McBride admits to leaking documents that formed part of the basis of an ABC investigation broadcast in 2017 about Australian special forces in Afghanistan.

The ABC reported growing unease in the Australian Defense Force leadership about the culture of special forces and that Australian troops had killed unarmed men and children.

But McBride has pleaded not guilty to all charges. He told reporters outside court he had a duty as an army officer to expose wrongdoing by generals and government ministers over Australian operations in Afghanistan .

"A lot of what they say is national security is actually a national shame," McBride said outside court.

"I have no doubt, once I'm acquitted, that the media and the world will hear about what went on because the reality is that none of it is truly national security," he added.

McBride said while he had been charged in September last year, the prosecution had yet to provide him with a brief of evidence because they did not have a case against hm. If convicted, he said he faced a potential 60-year prison sentence.

The veteran of two tours of duty Afghanistan decline d to elaborate on what had happened on Afghan mountain in 2013 that he wanted to expose.

"I'm not going to go into all the details, but what I saw appalled me," McBride said. "I've been to the killing fields of Rwanda, I've been to Afghanistan under the Taliban. What I saw in the Australian government in 2013 and the leadership of the ADF (Australian Defense Force) was worse than anything I'd ever seen in my life. It was disgusting and once every Australian hears about it and understands the implications, you would be ... absolutely sickened. You would be ashamed to be an Australian."

McBride described safeguards for whistleblowers in Australia as "a joke: There's no such thing."

Colleary and a former spy have both been charged after accusing Australia of illegally bugging the East Timorese Cabinet in 2004 while negotiating a deal to share oil and gas revenue.

ASIS is an overseas spy agency that operates out of Australian embassies. They face a preliminary hearing in Canberra in August.

Collaery has said he and the former spy were victims of a vindictive prosecution by the government because they had exposed illegal spying on the East Timor government. 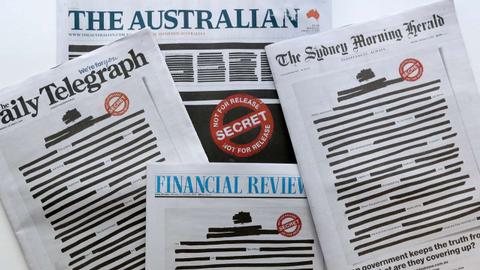