Thousands rally in protests against new citizenship law seen as anti-Muslim, while Hindu nationalist ruling party releases video with animated Muslim characters as part of publicity blitz to try to bust "myths" around the law.

Thousands of protesters marched in parts of southern India on Monday to condemn a new Citizenship law that has sparked deadly protests in which at least 25 people were killed and over 7,000 arrested.

Also on Monday, India's ruling party launched a video with animated Muslim characters on social media as part of a publicity blitz to try to bust "myths" around the law.

The Citizenship Amendment Act [or CAA] aims to fast-track citizenship for persecuted Hindus, Parsis, Sikhs, Buddhists, Jains and Christians who arrived in India before December 31, 2014, from Muslim-majority Afghanistan, Bangladesh, and Pakistan.

Sea of people on the streets of Bangalore #CAA_NRC_Protest .

The passing of the bill on December 11 triggered widespread demonstrations across India. Critics say the law discriminates against Muslims and undermines India's secular constitution. They question why the law does not include Muslims fleeing Sri Lanka and Myanmar, which are majority Buddhists.

India is not a signatory to the 1951 Refugee Convention, which spells out refugee rights and state responsibilities to protect them.

Nor does it have a domestic law to protect the more than 200,000 refugees it hosts, including Tibetans, Sri Lankans, Afghans, Bangladeshis, and Rohingyas from Myanmar.

Meanwhile, BJP launched a video on Monday showing two bearded men in traditional Muslim clothing discussing the legislation before concluding that the country can only progress if there is "peace and brotherhood".

The video, which was released by PM Narendra Modi's party on its Twitter handle, has garnered thousands of "likes", but also some ridicule.

The ruling right-wing government also carried an advertisement across all national dailies, with a "myths vs facts" explainer to show the law was not against India's 200 million minority Muslims who form some 14 percent of the population.

The advert also stated that there were no immediate plans to roll out a nationwide register of citizens, which has stoked fears of Muslims and others unable to prove they are Indian becoming stateless.

Even if the register would be rolled out, "the guidelines would be framed such that no Indian citizen would face any harassment whatsoever", the advertisement read.

The wave of protests across the country marks the biggest challenge to Modi's government since sweeping to power in the world's largest democracy in 2014.

In a speech on Sunday, Modi sought to reassure the Muslim community saying they "don't need to worry at all" and laying emphasis on India's diversity.

In the coming few days, his party says it will contact more than 30 million families, organise countrywide rallies and hold over 250 press conferences to dispel doubts over the new law.

CCTV visuals from a mosque in #Muzaffarnagar show that cops allegedly tried to vandalise it on the night of 21 Dec when the anti-#CAA protests turned violent in the area. @shadabmoizee reports from the ground.
More updates here: https://t.co/iK5IFjszqO pic.twitter.com/Ico8X6IMWL

Demonstrations have been largely peaceful but protesters have also hurled rocks and torched vehicles, while heavy-handed police tactics including the storming of a Delhi university a week ago have fuelled anger.

The protests that first started in the northeastern state of Assam have since spread to the rest of the country, with Uttar Pradesh –– a tinderbox state with a population of over 200 million –– seeing the maximum deaths.

Seventeen people have died, mostly from firearm injuries, in the state including a schoolboy who was crushed during a stampede that broke out as police tried to disperse the protesters. 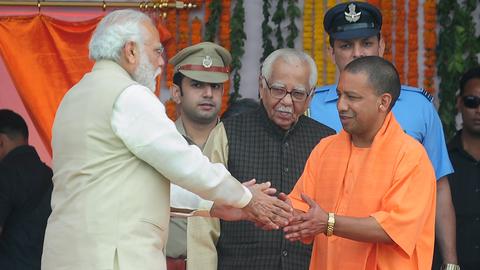