Five men who took part in a mob attack on Hong Kong democracy supporters two years ago were found guilty of rioting and wounding on Friday in the first convictions over an assault which sparked widespread outrage.

The brazen attack took place in the train station of Yuen Long — a town close to the rural border with mainland China — during huge democracy rallies that were convulsing the finance hub.

Dozens of men dressed in white and wielding sticks pounced on protesters returning from a rally in the city, as well as reporters and ordinary commuters, sending some 50 people to hospital.

Live broadcasts of the attack — and the police's perceived failure to respond quickly enough — was a turning point in the huge protests, further hammering public trust in the city's government.

A sixth defendant, transport worker Wong Chi-wing, was acquitted after Yip ruled he could not be clearly identified in the CCTV footage.

All five offenders, together with two other defendants who previously pleaded guilty, will be sentenced on July 22, one day after the second anniversary of the attack.

The attack was a public relations disaster for Hong Kong's police force, especially after officers were photographed talking to men in white wielding sticks and letting them leave the scene.

Meanwhile, Hong Kong's pro-democracy Apple Daily newspaper hit the stands on Friday, a day after police raided its newsroom, with an extra-large print run and a characteristic message of defiance emblazoned on its front that read: "We must press on".

The bold stance came as police formally charged two of the newspaper's executives under a sweeping new security law that cracks down on dissent in the international business and media hub.

The tabloid and its jailed owner Jimmy Lai have long been a thorn in Beijing's side with unapologetic support for the city's pro-democracy movement and scathing criticism of China's authoritarian leaders.

Those same leaders are now determined to see it silenced.

More than 500 police officers raided the paper's newsroom on Thursday in an operation that authorities said was sparked by articles that allegedly appealed for sanctions against China.

It was the first time the political views and opinion published in Hong Kong media outlet have triggered the broadly worded national security law.

Both Law and Cheung were charged on Friday.

Most of those charged under the law are denied bail and will spend months behind bars before going to trial.

He has also been charged under the national security law and has had his Hong Kong assets frozen by authorities. 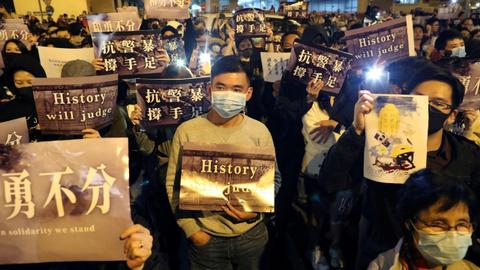