Police in India-administered Kashmir say an Indian army officer and two others "planted illegally acquired weapons" on the bodies of three young men to pass them off as "terrorists" after killing them in a staged gun battle in July.

Indian police have accused an army officer and two associates of planting weapons on the bodies of three labourers killed in disputed Kashmir to make it look as though they were rebels in a staged gun battle.

A police statement issued late on Sunday said the officer and two others "planted illegally acquired weapons and material on their dead bodies after stripping them of their identities and tagged them as hardcore "terrorists" in possession of war-like stores."

Indian army has not disclosed how its officer – identified by police as Captain Bupinder – obtained illegal weapons.

Their killings in July sparked a furore in the India-administered side of the Himalayan region that is also claimed by Pakistan.

The Indian army had claimed that the three men were killed in a gun battle in the village of Amshipora in south Kashmir and that three weapons were found on them.

The bodies were hurriedly buried in a remote border area.

The men's families in the remote mountainous area of Rajouri identified them one month later from photographs that circulated on social media. The families said the three had only been looking for work in Kashmir's apple orchards.

The three men — whom the Indian army called "Pakistani terrorists" — were killed on July 18 in the southern Kashmir valley, and buried in a remote border area.

The controversy sparked rare separate investigations by the Indian army, which has more than 500,000 troops in Kashmir, and the police, who said they were only informed of the supposed firefight after the killings which violated the normal rules of engagement.

The army said last week only that the recording of evidence in the case had been completed and action would follow.

Following the investigation, the bodies of the three slain men were exhumed in September and returned to their families after DNA tests.

Captain Bhoopendra Singh has been charged with murder, conspiracy, and other offences, the police statement said.

He is now in military detention. The two civilian "sources", who were with him at the time, are in police custody.

READ MORE: A sleepy Kashmiri village and the men killed by Indian Forces

A local court has asked the army whether the accused officer should be tried in a civilian court or subjected to a military court-martial, according to the statement.

Under the Armed Forces Special Powers Act or AFSPA, an emergency law applied in Kashmir since 1990 when an insurgency against Indian rule erupted, government forces deployed in the region cannot be tried in a civilian court unless the New Delhi government agrees.

No such permission has ever been granted during the last three decades, despite dozens of requests by the police after investigations into actions by the Indian forces.

The notorious act gives the Indian military in Kashmir sweeping powers to search, seize, and even shoot suspects on sight without fear of prosecution.

The special powers were given to the military in 1990, a year after a popular armed rebellion erupted in Kashmir seeking the Himalayan region's independence or a merger with neighbouring Pakistan.

Kashmiri civilians and activists for years have accused Indian troops of abusing their powers and repeatedly targeting civilians.

In 2000, the Indian army killed five men it alleged were rebels responsible for the massacre of 35 Sikhs in Kashmir.

An investigation later found the five were local villagers killed in a faked firefight.

In 2010, a massive uprising erupted in Kashmir after a police investigation found Indian soldiers had killed three civilians in a staged gun battle and then said the victims were rebels in order to claim a reward for killing them.

India has rejected every request since 1989 to prosecute Indian soldiers in civilian courts in Kashmir for rights abuses including murder and rape, according to official documents. 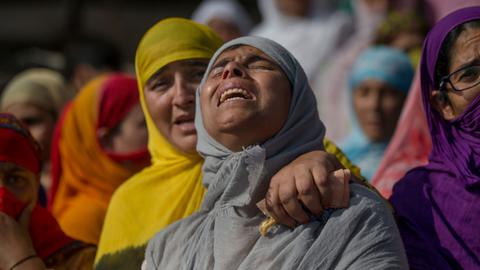