Tens of thousands of farmers block key highways across the country for three hours, as their leaders issue an ultimatum to Modi's government to repeal three new farm laws by October 2.

Tens of thousands of protesting Indian farmers have blockaded highways across the country for three hours to press their demands for the repeal of new agricultural laws.

Authorities deployed thousands of security forces mainly outside India’s capital on Saturday, where farmers have camped at three main sites for more than two months.

They say they won't leave until the government rolls back the laws it says are necessary to modernise Indian agriculture.

"After this, we will do further planning. We won't hold discussions with the government under pressure," he said.

Ten metro stations were closed on Saturday in central New Delhi, where a tractor rally last month turned into a violent rampage, and thousands of police manned barricades and roadblocks at key intersections.

Several rounds of talks between farmers with the government have failed to produce any breakthroughs.

#ChakkaJam Thousands of women,including farmers, laborers, political & social workers, participated in the agitation on the streets & highways across the #India under the call of a nationwide 'Chakka Jam' and expressed solidarity with the #farmers who were protesting in #Delhi pic.twitter.com/bCh8cxni1l

No new trouble amid strikes

The farmers' unions called for protest roadblocks across the country in the latest day of action. The media reported isolated farmers and their supporters occupying roads and toll booths in several states but no trouble.

Outside of Delhi major police deployments were ordered in the key farm states of Uttar Pradesh, Haryana, and Punjab.

"There is an adequate deployment of force at sensitive locations" around Delhi, Uttar Pradesh police spokesman Atul Srivastava said.

The farmers say new farm laws will leave them poorer and at the mercy of corporations. Their action is a major challenge to Prime Minister Narendra Modi.

On Friday, Agriculture Minister Narendra Singh Tomar defended the laws in Parliament, dampening hopes of a quick settlement as he made no new offer to resume talks with the farmers.

Imagined INDIA without FARMERS?
Remember! NO FARMERS NO FOOD!#FarmersAreIndia pic.twitter.com/lhktD7LRpE

The largely peaceful rally turned violent on January 26, India’s Republic Day, when a group of farmers riding tractors veered from the protest route and stormed the 17th century Red Fort.

Hundreds of police officers were injured and a protester died. Scores of farmers were also injured but officials have not given their numbers.

Farmer leaders condemned the violence but said they would not call off the protest.

Since then, authorities have heavily increased security at protest sites outside New Delhi's border, adding iron spikes and steel barricades to stop the farmers from entering the capital. 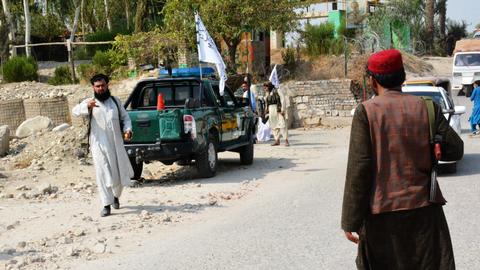