Despite Indian Prime Minister Narendra Modi’s pledge to allow Kashmiri’s to celebrate Eid, many residents of the Himalayan region said they faced restrictions that left them unable to make the traditional sacrifice.

On the eve of Eid al Adha, residents of the Anchar area of Srinagar stood up all night in an attempt to block entrances into the neighbourhood.

They used steel sheets, rocks, dumpsters, and whatever they could find to halt Indian paramilitary forces and the police from making their way in. Government troops had laid a siege since the evening that led to protests which continued throughout the night.

"They wanted to impose a curfew in the neighbourhood during the night to stop us from offering Eid congregational prayers at Jenab Sahib mosque. We also believe if they had been successful, they would have detained multiple youths from here," said Tawheed, a college student who lives in the area.

On Friday, a mass protest in the same area turned into clashes between protestors and Indian forces in which many protestors received injuries caused by pellets fired by soldiers.

For the ninth consecutive day, the entire region remains under a severe military lockdown, after the Indian government revoked Article 370 of the constitution through a presidential amendment.

The law had guaranteed a degree of autonomy to the region after it acceded to India following the partition of British India. Phone lines and the internet remain suspended making it impossible for the seven million residents of the valley to contact the outside world.

On Eid, one of the most important Muslim festivals, towns and villages in Kashmir resembled ghost towns. Streets and even narrow alleyways remained deserted all day. Indian paramilitary forces had erected barricades across the city that turned away the few civilians trying to reach their friends and relatives. Others didn't even try to venture out of their homes.

“After Eid Prayer, I attempted to go to my aunt's house in the neighbouring area to greet them for Eid but the troops didn't allow me to pass. They even threatened to hit me," Nadeem, a shop owner from Srinagar's Rajouri Kadal area, told TRT World.

On Thursday, Indian Prime Minister Narendra Modi said in a televised address that people in Kashmir would have "no problem" on Eid al Adha.

"The government is ensuring that people in Jammu and Kashmir don't face any difficulties in celebrating Eid," Modi said.

However, in Srinagar, many residents felt the restrictions were unnecessarily stricter on Eid.

"Forget about the main roads, there are troops in every alley today," said Basheer, a garment merchant from the Rainawari area. Basheer said he was unable to make the qurban (sacrifice) on the day.

Others in the neighbourhood, who had managed to perform the obligatory sacrifice, were unable to distribute the sacrificial meat among friends and family as is the tradition in the Himalayan region.

Basheer, 52, believes restrictions imposed in the run-up to Eid and on the day, have hit the local business community very badly.

"The business community here had already invested in goods which they expected to sell during the course of Eid. But now all that fresh stock is just going to stay piled up for months. Some people are already facing a cash crunch due to this situation," he added.

For those who have family members and friends outside of Kashmir, Eid has been particularly painful. Over the last week, hundreds of worried families have desperately been trying to pass messages to their loved ones. Outside the deputy commissioner of Srinagar's office families have been waiting for days to use some of the few phones that are still working to make one call.

Haleema, 44, along with her son, who wished to remain anonymous, has had to make multiple visits to the government office to call her daughter living in India's capital New Delhi.

"How can we celebrate Eid in such an atmosphere. We are very worried. There is no happiness at all. I can't stop thinking about my daughter," she said. After a suicide attack on a paramilitary convoy in February, hundreds of Kashmiri students and businessmen were forced to return home after facing threats of violence. Haleema fears something similar may happen if Kashmir continues to remain tense.

Ram, an Indian paramilitary soldier stationed near a barricade at Hawal Chowk in Srinagar, is going through a similar dilemma. He hasn't had any contact with his family in Uttar Pradesh, India over the last week. Dressed in full riot gear, while holding an Insas rifle, he said in his eight years of duty in the valley he hasn't faced such a situation. "Usually, I call them a few times every day. But now its been over a week, I'm sure my family will be worried," he said

After the congregational prayers ended at Jenab Sahib mosque in Anchar, hundreds of men and women carried out a peaceful demonstration. Carrying black flags and placards, the protesters cried out pro-freedom slogans. Multiple helicopters scoured the area from the skies as protesters moved from one alley to the other. The crowd moved through the entire neighbourhood before coming to a grinding halt at the main road, where Indian paramilitary forces stayed positioned.

"We’ve become exhausted all night trying to keep forces out. How much can we fight? They don't care - if we get close to them they might kill us. This is an unfair fight. But we are ready to go all the way," said a protester before the crowd slowly started to disappear. 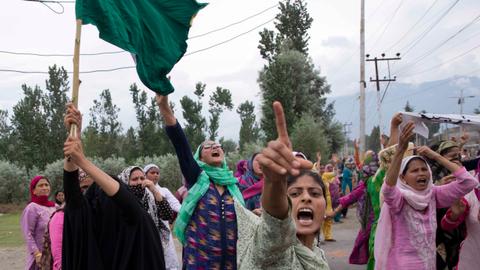 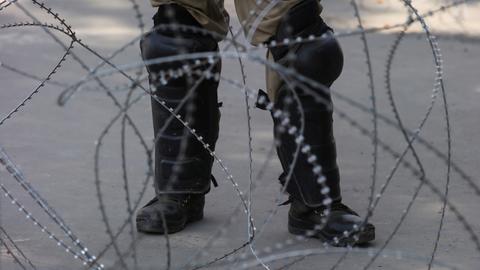 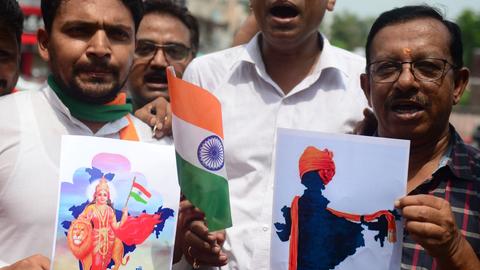