India is home to the largest population of illiterate adults in the world; how do they recognise the parties they vote for at the ballot box?

As India went to the polls on Thursday, a significant number among the 900 million eligible voters cast their votes following the symbols – not the names – of their favourite candidates.

Over 2,000 parties have fielded several thousand candidates for the election that will run between now and May 19, in 543 constituencies across the nation of 1.3 billion people, with results not due until May 23.

The parties will canvass votes deploying symbols, pasting them on banners, flags, hoardings and buntings. The entire country will be flooded with colourful campaign posters with respective party symbols.

Here are the most prominent symbols that are identified with leading political parties of India.

The lotus is the symbol of India's Hindu nationalist Bharatiya Janata Party (BJP), which is currently ruling the country. It comes from Hinduism and its tradition, symbolising the Hindu goddess of wisdom.

The Indian National Congress, India's leading opposition party, which has ruled the country for most of the post-Independence years, uses a hand as its symbol.

It's the only party that uses the symbolism of a body part; the hand denotes unity and strength.

The Bahujan Samaj Party uses the elephant as its election symbol. It represents the strength of the minority Dalit community. The elephant is one of the few animal symbols in the country.

In India, the bicycle used to be a common mode of transport for several years after the country won independence from Britain in 1947. It comes as a political symbol to represent the masses.

Ears of corn and a sickle

Like communist parties around the world, the symbol of the hammer, sickle and star is also replicated by the left-wing parties of India.

Common house objects like a kitchen sink and pillows are often are also used as election symbols by different parties to position themselves as representing the common man. For example, in southern India, the Yuvajana Sramika Rythu Congress Party uses a ceiling fan as its symbol. 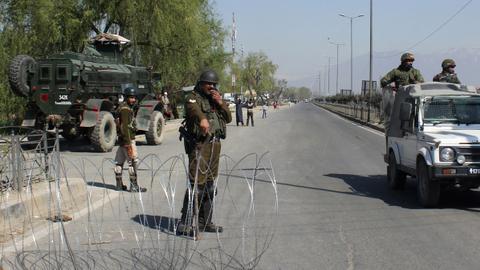