During his annual State of the Nation Address, Philippine President Rodrigo Duterte pushed his law-and-order policies that have made him hugely popular with many Filipinos but have been condemned by human rights groups and critics.

Philippines' President Rodrigo Duterte addressed Congress in his second State of the Nation speech at the Batasan Pambansa Complex in Quezon City, on Monday.

Philippine's National Police said 6,300 police personnel were deployed to eight areas of the Batasang Pambansa Complex to thwart any eventualities.

During his speech, he justified extending martial law in Mindanao as a necessary precaution against anti-government militancy on the island.

He further said the operation against the pro-Daesh Maute group has started to free the people of Marawi City.

Various opposition groups held rallies near the Congress ahead of Duterte's address.

Waving red flags, several thousand left-wing protesters marched with an effigy of Duterte to the House of Representatives to demand he deliver on promises made in his first state of the nation speech last year, from holding peace talks with communist insurgents to improving internet speed.

Riot police, without batons and shields to underscore a policy of maximum tolerance toward demonstrators, separated the protesters from a smaller group of Duterte supporters outside the heavily guarded building, where the president delivered his speech.

Duterte vowed to press on with his controversial drug war that has claimed thousands of lives, as he outlined his vision of an "eye-for-an-eye" justice system.

He devoted large chunks of his annual State of the Nation Address to pushing his law-and-order policies that have made him hugely popular with many Filipinos but have been condemned by human rights groups and other critics.

"No matter how long it takes, the fight against illegal drugs will continue because that is the root cause of so much evil and so much suffering," Duterte told lawmakers from both houses of Congress.

"The fight will be unrelenting despite international and local pressures, the fight will not stop until those who deal in it understand that they have to cease, they have to stop because the alternatives are either jail or hell."

More than 2,000 other people have been killed in drug-related crimes, according to police data. Rights groups say many of those victims have been killed by vigilante death squads linked to the government.

Duterte swept to victory in last year's presidential elections after promising an unprecedented crackdown on drugs in which tens of thousands of people would die.

Since he took office on June 30 last year, police have reported killing nearly 3,200 people in the drug war.

Appeals to reintroduce the death penalty

He emphasised that capital punishment was about "retribution" as much as deterrence.

"In the Philippines, it is really an eye for an eye, a tooth for a tooth. You took a life, you must pay it with death. That is the only way to get even."

The lower house of Congress this year passed a bill to bring back the death penalty, but the Senate has yet to approve it.

Duterte said he wanted all mineral resources extracted from the country to be processed domestically and, if possible, to stop exporting such commodities.

He further said he would hold mining companies responsible for the cleanup and rehabilitation of areas damaged by mining.

Earlier on Friday, he said the government would draft a new law for the country's mining industry, which he said pays too little in tax and not enough in compensation for any environmental damage.

Taking a dig at the US

Duterte asked America to return three church bells seized as spoils of war from the eastern Philippine village of Balangiga more than a century ago.

"Give us back those Balangiga bells," Duterte said in his speech, attended by the US ambassador and other diplomats.

"They are part of our national heritage, return it to us, this is painful for us."

Duterte, who calls himself a socialist, has had an antagonistic attitude toward the US while bolstering ties with China and Russia. 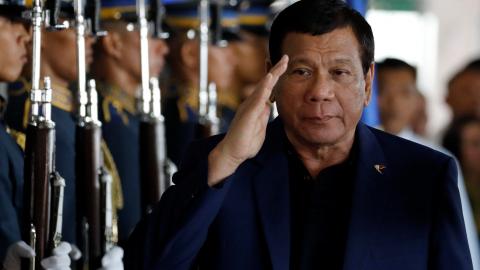