We delve into the short but gripping history of the James Bonds of doves, hawks and donkeys on India-Pakistan border:

India's Border Security Force has reportedly arrested and sought charges to be filed against a pigeon ... yes, a pigeon.

The charges are unclear but appear to be related to the bird flying sans permission into Indian air space from Pakistan with a phone number taped to its left foot and landing unannounced on the shoulder of a guard on duty near the excitable border.

Saturday's incident is not the first of its kind between the two rival neighbours. There has been noticeable uptick in the detentions of suspect birds in recent years, possibly following the flow of hostile rhetoric, creating a need for bird-brain experts and fluffing up defence budgets.

On a more serious note, pigeon keeping remains a popular hobby in South Asia. Owners often tag their homing birds with identification numbers or add their contact numbers in case the culvers get lost.

Millions of birds and animals cross the international borders but here is a list of the unlucky (or successful depending on whom you talk to) few that managed to arouse suspicions and cause alarm around the Indo-Pak border region.

India’s paramilitary force asks Punjab state police to file charges against a Pakistani pigeon who perched on the shoulder of an Indian soldier deployed at Punjab border region.

The pigeon remains in detention as authorities investigate the bird and a piece of paper that had what appeared to be a Pakistani mobile number attached to its leg.

#India BSF wants to register a case against an intruder from #Pakistan, that happens to be a #pigeon, while the #PunjabPolice are seeking a legal opinion on this.The pigeon landed on the shoulder Indian soldier at the Rorawala post last Saturday, allegedly after flying across LOC pic.twitter.com/NWvpzE5Cly

Villagers in India-administered Kashmir handed over a pigeon to security forces who detained the bird after it flew in from Pakistan.

The bird was released after its owner, a Pakistani villager, appealed for his pet to be freed, clarifying the numbers found scribbled on a paper attached to the pigeon were just his phone number in case it got lost. Like it did.

Another pigeon from Pakistan was caught by India’s border forces. It was handed over to local Indian police.

The bird was sent for further examination and x-ray scans.

Indian security personnel reportedly captured a hawk that was flying above the skies in the Indo-Pak border region in “mysterious circumstances.”

The bird was reportedly found with an electronic device attached to it.

Indian forces apprehended another pigeon, this time at the Sino-Indian border.

Villagers caught the bird and handed it over to authorities after finding a tag on the bird that bore numbers in Chinese.

Another pigeon from Pakistan, tagged “5547 Janbaz Khan” – undoubtedly a spy's hommage to fellow fictional spy Bond – made an escape while it was held under the custody of India’s Rajasthan police.

The alleged Pakistani spy won its freedom after a policeman opened its cage “out of curiosity.”

The bird reportedly flew back to Pakistan despite a two-hour long attempt by police from Rajasthan and Punjab states of India to nab the pigeon.

Great News, Agent Ghutar Goo of the Pigeon squadron of ISI has conducted a heroic escape from India & returned to Pakistan. #IndiaVsPigeon pic.twitter.com/nUq8YEaR4f

Indian police apprehend a pigeon in Punjab state’s Pathankot area who was carrying a note inscribed with a threat to Prime Minister Narendra Modi in Urdu, which is commonly used in Pakistan.

Months after its capture and several scans and examinations later, authorities had said the bird would be released.

Indian security forces nab a pigeon over suspicions of spying after discovering a message with a phone number stamped on its back in Urdu.

The bird was discovered by a boy in Manwal village, around two kilometres from the Indo-Pak border, who then handed the pigeon over to security personnel.

The discovery of a dead hawk in India’s Rajasthan state that borders Pakistan sparked fears of spying in the region.

The bird was fitted with what appeared to be a camera and an antenna, Officials said the camera’s lack of sophistication suggested it was probably used by hunters, not for military purposes.

Similarly, pigeons crossing in from Pakistan into India also raised alarm among officials the same year over their suspected use in drug smuggling operations.

One of the first instances of pigeons being detained over spying fears following cross border travel is reported after Indian villagers alert security forces about the presence of a bird from Pakistan.

The bird had a ring around its foot and a phone number from Pakistan as well as an address stamped on its body in Urdu. The pigeon was then held under spying charges.

Local had told police it was easy to distinguish Pakistani pigeons from their Indian counterparts because of their looks.

A memorable picture of the Hero Pigeon Before leaving for mission in #India #PigeonVsIndia pic.twitter.com/5pdSKx3z7G

Why did the mule cross the border? to become a hero

A mule enlisted by the Indian army was captured by the Pakistani side during the 1971 war between the two countries.

The mare, later named Pedongi, managed to escape from its captors and returned to its Indian camp around two to 25 kilometres away, hauling a machine gun and some ammo as booty.

The president awarded the “Vir Chakra” gallantry award to the mule for its loyalty and heroics.

The India-Pakistan border has been used as a crossing by several wild animals including leopards, snow leopards, monkeys and wild donkeys.

Many of the animals face hurdles since the border between the two nuclear-armed countries was fenced off.

Several incidents of the wild animals crossing borders into villages resulting in their capture have also been reported over the years.

Furry and fluffy are not the only ones India's radar. The highly alert security apparatus has gone into action over balloons that have crossed the border from Pakistan into India.

The nuclear-armed nations have also been trigger happy about arresting mammals not involved in espionage.

A donkey was arrested in Pakistan over gambling charges, while a parrot in India was detained after it used abusive language in front of an 85-year-old woman.

Two goats were also reportedly charged with trespassing after they encroached upon the lawn at the residence of a local judge to munch on grass.

Hammad Abbasi is a producer at TRT World. 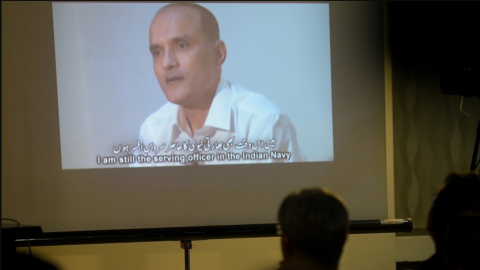