Nepal is recording 57 times as many cases as a month ago, with 44 percent of tests now coming back positive, the International Federation of Red Cross and Red Crescent Societies said.

Across the border from a devastating surge in India, doctors in Nepal have warned of a major crisis as daily coronavirus cases hit a record and hospitals were running out of beds and oxygen.

Nepal reported 9,070 new confirmed cases on Thursday, compared to 298 a month ago. The number of fatalities also reached its highest with 58 on Wednesday and 54 on Thursday, for a total of 3,529.

"The hospital is overloaded, we are treating patients at each and every corner of the building," said Badri Chapagain, a doctor at the hospital.

Relatives of patients are scrambling for medicine and intensive care beds.

"I cannot say how difficult it was. We have found a bed now but we are searching for Remdesivir vials. We are exhausted," Pandey said.

Surya Raj Pandey, who co-founded Covid Connect Nepal, a volunteer group to help patients, said that requests for ICU beds and oxygen cylinders are growing each day and it is becoming harder to find matches.

Nepal is now recording 57 times as many cases as a month ago, with 44 percent of tests now coming back positive, the International Federation of Red Cross and Red Crescent Societies said on Wednesday.

"What is happening in India right now is a horrifying preview of Nepal’s future if we cannot contain this latest Covid surge that is claiming more lives by the minute," said Netra Prasad Timsina, chair of the Nepal Red Cross.

"It is beyond distressing to see that people cannot say goodbye to their loved ones as cremations are taking place at record levels due to these new Covid variants, which are striking down people of all ages in Nepal."

Nepal shut down almost all flights this week and has imposed lockdowns or partial lockdowns in 80 percent of its districts to curb infections.

The country's tourism industry suffered a devastating blow in 2020, and this year climbers at its big money-spinner Mount Everest have tested positive, raising fears the virus may ruin a a hoped-for bumper season on t he world's highest mountain.

“Right now there are no beds available today in any hospital that is treating Covid patients," said Dr Jyotindra Sharma, chief of Hospital for Advanced Medicine & Surgery in Kathmandu.

“Even if any beds were made available, there is a huge scarcity of oxygen and we are not at the peak of this crisis."

At the hospital, one of the leading facilities in Nepal for treating Covid-19 patients, extra beds were crammed to accommodate more people. They've all been taken and the only way to get admitted is through a waiting list.

“In the extreme situation, people could be dying in the streets," Sharma said, adding it's "just not possible to immediately increase the capacity of the hospitals."

At the government-run Tribhuvan University Teaching Hospital, several Covid-19 patients were lying in beds set up on the veranda and hooked to oxygen cylinder.
They're the lucky ones. Others were turned away because there's not enough space or equipment.

“We are under-prepared, under-resourced, and under-capacitated to perform any thing that is expected," said Dr Bishal Dhakal, who has been working with coronavirus patients since the beginning of the pandemic.

The government has pledged several times to increase the number of hospital beds and boost the treatment and preventive measures.

However, there has not been any significant change.

Infections spill over from India

Nepal shares a 1,850-kilometre open border with India and communities commonly travel across it for work and to visit family, and many are now returning home.

Nepalese towns near the Indian border could not cope with the growing number of people needing treatment, while only 1 percent of the country's population was fully vaccinated.

Even as cases rose in early April, neighbouring India, mass gatherings including religious festivals, political meetings and weddings continued in the country.

Many Nepalis were also at India's Kumbh Mela attended by millions of Hindu devotees, including the former king Gyanendra Bir Bikram Shah and his queen, who have been hospitalised after testing positive.

In early April, Nepal was reporting fewer than 200 cases a day.

In a country of 30 million, only 2.4 million shots from India and China have been administered, and only a small fraction have received both doses.

Nepal began its vaccination campaign in January with 1 million doses of the AstraZeneca shots donated by India, but it had been suspended because of India’s refusal to allow exports as its crisis worsened.

The vaccination resumed when China donated 800,000 doses, and Nepal is negotiating with Russia for supplies of the Sputnik V shots.

The State Department said it was allowing non-essential diplomats and the families of all American staff at the US Embassy in Kathmandu to leave Nepal at government expense.

The department also advised private Americans to reconsider any plans they may have to visit the Himalayan country and asked those already there who wish to leave to submit information to the embassy. That step suggests the embassy may organise charter flights out of the country in the absence of regularly scheduled commercial flights. 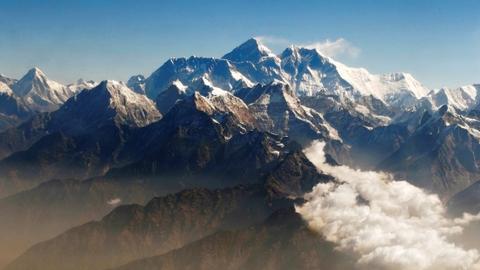