Government officials, as well as company and factory workers, were "actively joining the fight in drought-prone regions," according to Rodong Sinmun newspaper.

North Korea's white-collar workers have been deployed to farming areas across the country to help fight against drought, state media said, as the impoverished nation struggles to prevent heavy crop damage.

The North's Rodong Sinmun newspaper reported on Wednesday that government officials, as well as company and factory workers, were "actively joining the fight in drought-prone regions".

"As soon as they arrived at the site, they immediately started watering, working shoulder-to-shoulder with farmers as they waged a fierce battle with nature," the report added.

The isolated, nuclear-armed nation – which is under multiple sets of sanctions over its weapons programmes – has long struggled to feed itself and suffers chronic food shortages.

The country is highly vulnerable to natural disasters including floods and drought due to a chronic lack of infrastructure, deforestation and decades of state mismanagement.

The report did not specify the damage so far, but said the efforts were aimed at countering the ongoing dry spell as well as "preventing crop damages from drought in advance".

The dry spell was forecast to continue throughout the week, the official KCNA news agency said citing the country's weather agency.

There was a chance of "slight rain" on Friday, "but it will not be helpful in dissolving the drought", it added.

North Korean leader Kim Jong-un has called for measures to improve the "tense" food situation, caused by the pandemic, typhoons and international sanctions over the country's weapons programmes.

North Korea has been living under a rigid self-imposed coronavirus blockade since early 2020 to protect itself from the pandemic, although it briefly resumed trade with China early this year.

North Korea has yet to confirm a single coronavirus case.

The North has a fragile economy and has long been criticised for prioritising its military and banned nuclear weapons programmes over adequately providing for its people.

The country has periodically been hit by famine, and hundreds of thousands of people died – estimates range into millions – in the mid-1990s. 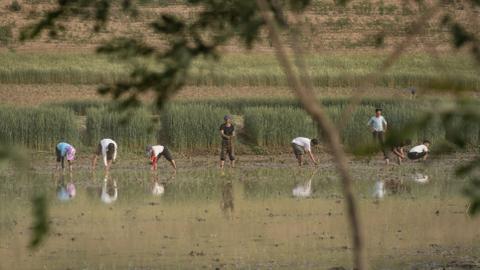