A wave of terrorist attacks has rocked the South Asian country this week after a period of relative calm.

A string of terrorist attacks

After a relative calm of few months, Pakistan has been rocked by a series of deadly terrorist attacks that have claimed over a hundred lives this week, from February 13 to 16.

It started on Monday, when a suicide bomber hit a crowd of pharmacists who were protesting outside the provincial assembly in the city of Lahore. Two senior police officers were among the 13 people who lost their lives.

Hours later, a senior bomb disposal squad expert was killed along with a colleague in the southern city of Quetta as they tried to defuse an improvised explosive device.

Then on Wednesday, a suicide bomber killed five people in the tribal region of northwestern Pakistan when he was stopped from entering the administrative headquarters.

Just 100 kilometres away, a suicide bomber rammed his bike into a van carrying civil judges in the northern city of Peshawar on the same day. The driver was killed and four judges were injured.

The authorities were still coping with the aftermath of these attacks when a suicide bomber struck a shrine of a sufi saint in the southern Sindh province on Thursday evening, leaving more than 70 people dead and hundreds injured. It was one of the worst attacks in months.

Who is behind the attacks?

Pakistan's military has killed many militants of the TTP and JuA in the last few years, but the groups continue to find new recruits and strike from time to time.

The LeJ is a sectarian organisation blamed for hundreds of assassinations of Shia Muslims. The group is known to have worked with other militant organisations that have broader regional aims.

Daesh claimed responsibility for the attack on the shrine, announcing its involvement on its propaganda website, Amaq. It has a relatively limited presence in Pakistan but that hasn't stopped it from carrying out major acts of terrorism.

What is being done to stop further attacks?

Pakistani security forces reacted swiftly after the attack on the shrine, with the army chief General Qamar Javed Bajwa saying the death of civilians would be "avenged."

By Friday afternoon, more than two dozen suspected militants were killed in operations conducted throughout the country.

Islamabad, which suspects involvement of foreign militants in the attacks, said it has handed over a list 76 terrorists to Afghanistan, asking they be given up immediately.

Numerous military operations have been carried out against the militants in last few years. The last major military intervention – Operation Zarb-e-Azb – was launched in mid-June 2014 to drive out fighters from the tribal areas.

Thousands of militants have been killed since then but various extremist groups continue to regroup to stage counterattacks against civilians.

Have there been similar attacks in past?

Pakistan has been engaged in a bloody war with militants since the early 2000s when then-President General Pervez Musharraf joined the US-led war on terror.

More than 60,000 people have been killed since 2003, according to the South Asia Terrorist Portal, which keeps track of fatalities.

There were a spate of attacks last year as well.

More than 50 people were killed in a blast at a shrine. Over 60 police recruits were killed at a training centre, and a suicide bombing claimed the lives of 70 lawyers.

What are the experts saying?

The surge in terrorist attacks has coincided with the start of work on power and infrastructure projects financed by China under a multi-billion dollar investment plan, says Ikram Sehgal, a Karachi-based defence analyst.

"Foreign hand in these incidents cannot be overlooked," he told TRT World. "So many attacks across the country in a span of few days can't happen without involvement of India."

Over the years, India has invested more than $2 billion in Afghanistan, funding a dam and parliament's new building, and at the same time increasing its diplomatic presence there.

Islamabad has often accused India's intelligence agency Research and Analysis Wing (RAW) of whipping up terrorism in Pakistan by operating out of Afghanistan.

Pakistan's 4300-kilometre long border with Afghanistan is porous and difficult to man at all points.

But analysts say the blame also lies with Pakistan's government.

"If there is poverty, if there is an unjust system in which people don't trust, then terrorist organisations will always find new recruits," said former Pakistan military commander Naeem Khalid Lodhi.

"We have to stop political interference in police and judicial system. Many of problems would be solved." 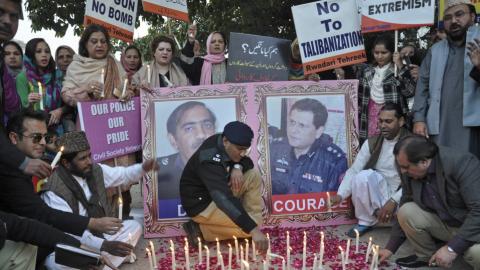