Pakistan's national carrier is firing 28 pilots found to have tainted licenses, the company's spokesman said on Wednesday, the latest chapter in a scandal that emerged in the wake of the Airbus A320 crash in Karachi in May.

An inquiry into the May 22 crash that killed 97 people on board resulted in the stunning revelation that 260 of 860 pilots in Pakistan had cheated on their pilots exams, but were still given licenses by the Civil Aviation Authority.

The government later fired five officials of the regulatory agency and criminal charges against them are being considered. According to news reports on Wednesday, 262 pilots are currently grounded in Pakistan.

READ MORE: A fatal crash, allegations and the tragedy of Pakistan’s national airline

The European Union’s aviation safety agency and the United Kingdom subsequently banned PIA from flying into Europe for at least six months following revelations that nearly a third of Pakistani pilots had cheated on their exams. Pakistani pilots flying with European airlines have also been grounded while their credentials are being verified.

Malaysia's aviation regulator has temporarily suspended pilots employed by domestic airlines who hold Pakistani licenses after the government of the South Asian nation revealed that many pilots had dubious qualifications.

The Civil Aviation Authority of Malaysia said in a statement on Thursday that the decision came after an evaluation of all foreign pilots in Malaysia. The regulator said there are less than 20 Pakistani pilots in the country.

Reforming PIA in the pipeline

Aviation Minister Ghulam Sarwar Khan has promised that a restructuring of PIA would be completed by the end of the year.

Opposition politicians have sharply criticised Khan's government for going public with the report's findings of widespread cheating on exams taken by pilots. The government replied saying Khan was cleaning up the corruption left behind by past governments in Pakistan.

When the International Monetary Fund gave Pakistan a $6 billion loan, it demanded an audit of PIA by the end of 2019, a deadline that was missed.

In an effort to stop the financial hemorrhage, Hafeez said the airline is restructuring with a business plan that will eventually reduce the numbers of employees to 7,000 and increase the numbers of aircraft to 45. Nearly 3,500 employees will be laid off through early retirement and attrition, said Hafeez.

On May 22, a PIA flight crashed into houses in Karachi, killing 97 people aboard the plane and a child on the ground. The government has so far not said whether the pilot and co-pilot of the doomed Karachi flight had tainted licenses.

Investigators blamed the pilots, who were chatting about the coronavirus while they first attempted to land the Airbus A320 without putting its wheels down.

Until the 1970s, Pakistan's largest airline was considered a top regional carrier but its reputation plummeted amid chronic mismanagement, frequent cancellations and financial struggles.

PIA, which is helmed by a serving air force officer, currently has a fleet of 31 planes and a payroll of about 14,500 workers. 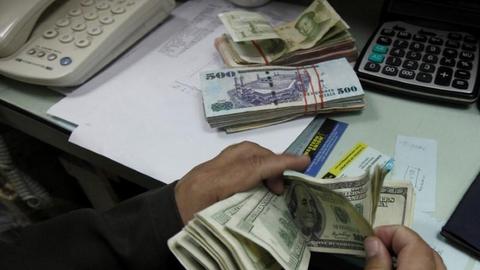