At least 11 bags of methamphetamine worth between $2M to $5M recovered during an operation to rid besieged Marawi City of Daesh and linked militants, officials say. Around 600 kg of the drug were seized by authorities in May.

The Philippines military found methamphetamine worth between $2 million to $5 million while clearing rebel positions in besieged Marawi City, officials said on Monday.

Fighting in Marawi City erupted on May 23 after a bungled raid by security forces on an Abu Sayyaf hideout. The leader of Abu Sayyaf is known as the Daesh emir in Southeast Asia; the Maute Group, which pledged allegiance to Daesh in 2014, responded by laying siege to the city.

The 11 bags of shabu, the local name for methamphetamine, were recovered on Sunday along with four assault rifles in the kitchen of a two-storey concrete house believed to be occupied by fighters from the Maute Group.

In late May, Philippines authorities seized more than 600 kilogrammes (0.5 tonnes) of methamphetamine in the largest such bust. It caused suspicions over funding of Daesh by the narcotics trade.

"This strengthens our findings that these terrorists are using illegal drugs," Major-General Carlito Galvez, military commander of western Mindanao, said in a statement.

President Rodrigo Duterte said the Marawi fighters are being financed by drug lords in Mindanao.

The army said nearly 350 people, including 257 militants, 62 soldiers, and 26 civilians, have been killed in four weeks of fighting.

The fighters were prepared for a long siege of Marawi, stockpiling arms and food in tunnels, basements, mosques, and madrasas, or Islamic religious schools, military officials have said.

Bundles of bank notes and cheques worth about $1.6 million were also discovered earlier this month in an abandoned rebel position.

Duterte launched a ruthless "war on drugs" after coming to power a year ago.

He also imposed martial law on the island of Mindanao on May 23.

Some people who fled the battle are dying in overcrowded and unsanitary evacuation centres since fierce fighting broke out in the southern Philippines, health officials said.

At least 19 people have died in the centres, said Alinader Minalang, the health director for Lanao del Sur province, of which Marawi is the capital.

Around 300 cases of diarrhoea have been recorded among the nearly 40,000 people huddled in emergency shelters set up in community halls, gymnasiums, and Islamic schools, he said.

Many of those who died were elderly and had pre-existing conditions, but at least two of the fatalities were due to diarrhoea.

"The cause of the increase in diarrhoea cases is sanitation issues and a lack of sources of potable water," Minalang said.

Families of up to a dozen people sleep together on hard concrete floors in the centres and, in some places, hundreds are sharing a single toilet.

Tarhata Mostare is one of the refugees who was staying with more than 800 other people in a high school hall in Iligan City, 40 kilometres from Marawi.

"My children are getting sick. One has diarrhoea and another has an allergic reaction on his skin – the water we have to use here is not good," Mostare said.

Hundreds of people are still unaccounted for, believed to be stuck in the basements of a city that has been pummelled by government air strikes.

Residents said they have seen 100 bodies in the debris of ruined homes in the battle zone.

The mostly Muslim evacuees are eager to return home by the weekend for Eid al Fitr, the biggest festival of the year that marks the end of the holy month of Ramadan.

But weeks of continuous artillery and aerial bombardment have destroyed many homes.

The army says it is nearing victory, but hostilities will have to be followed by a lengthy cleanup operation – unearthing and disarming unexploded ordnance and scouring for possible booby traps – before residents can go home.

"I will be the happiest woman in the world if I am allowed to return," said Salema Ampasong, a 28-year-old woman who was among about 1,000 evacuees given shelter in a gymnasium in the town of Balo-i, several miles outside Marawi.

A fruit vendor, she said she had lost all her possessions, "but I would still want to come home."

In Balo-i, there's just one working toilet for the centre's 1,025 current residents.

Malnutrition is another worry in the centres.

Melia Sarap, the provincial nutritionist for Lanau del Sur, said initial surveys of more than 600 evacuees had found six cases of severe malnutrition and a further 20 cases of moderate malnutrition.

"The evacuation centres are very congested and the infection you can catch could result in malnutrition," Sarap said.

"If we just depend on rations alone [the malnutrition rate] can rise up."

Particularly of concern were lactating mothers, she said, for whom a nutritious diet is vital for both the mother's health and the development of the child.

"It's not good to feed children just on canned goods like this," Tarhata said, breastfeeding her baby.

"But it's the only way we can survive." 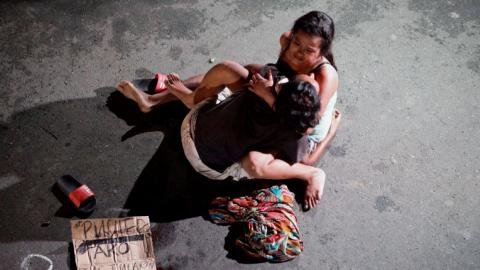