Fibre-based landline internet connections were still working in the country, albeit at drastically reduced speeds.

Myanmar's wireless broadband internet services have been shut down by order of the military, a local provider said, as protesters continued to defy the threat of lethal violence to oppose the junta's takeover.

A directive from the Ministry of Transport and Communications on Thursday instructed that "all wireless broadband data services be temporarily suspended until further notice,” according to a statement posted online by local provider Ooredoo.

Also Friday, the New York-based Human Rights Watch issued a report saying that Myanmar's military has forcibly disappeared hundreds of people, including politicians, election officials, journalists, activists and protesters and refused to confirm their location or allow access to lawyers or family members in violation of international law.

“The military junta’s widespread use of arbitrary arrests and enforced disappearances appears designed to strike fear in the hearts of anti-coup protesters,” said Brad Adams, Human Rights Watch's Asia director. “Concerned governments should demand the release of everyone disappeared and impose targeted economic sanctions against junta leaders to finally hold this abusive military to account.”

The crisis in the Southeast Asian nation has expanded sharply in the past week, both in the number of protesters killed and with military airstrikes against the guerrilla forces of the Karen ethnic minority in their homeland along the border with Thailand.

In areas controlled by the Karen, more than a dozen civilians have been killed since Saturday and more than 20,000 have been displaced, according to the Free Burma Rangers, a relief agency operating in the area.

The military did not announce or explain its order to telecom firms to cut wireless broadband, which adds to a ban on mobile data through which a nationwide movement has mobilised on social media and spread images of the junta's lethal suppression of mostly youth-led protests.

Late on Thursday, protesters spread a call for a "flower strike" at bus stops where demonstrators killed by security forces had departed on their last journeys.

"We will leave flowers at bus stops tomorrow ... That's what I want to tell you guys before the internet is down," Khin Sadar, a protest leader, posted on Facebook.

"In the following days, there were street protests. Do as many guerrilla strikes as you can. Please join."

"Let's listen to the radio again. Let's make phone calls to each other too."

Today in Myanmar, people did “#FlowerStrike” to honor fallen heroes during spring revolution by placing flowers in public areas. May all the fallen heroes Rest In Peace. May our revolution succeed with your sacrifice and love for the people. #RevolutionMustSucceed #Apr2Coup pic.twitter.com/FfixP1EPYz

The UN Security Council has "strongly condemned" the deaths of hundreds of civilians in Myanmar, in an unanimous statement watered down by China after two days of tough negotiations.

"Members of the Security Council expressed deep concern at the rapidly deteriorating situation and strongly condemned the use of violence against peaceful protestors and the deaths of hundreds of civilians, including women and children," read the statement, initiated by former colonial power Britain.

In earlier versions of the text, obtained by AFP, Western nations wanted to include a "readiness to consider further steps", a reference to the possibility of international sanctions.

Beijing also insisted on softening a reference to the "killing" of hundreds of civilians and changing it to civilian "deaths".

Still, despite the lengthy negotiations, getting the Security Council to speak with one voice sent a "very important signal," one ambassador said on condition of anonymity.

Since the February 1 coup, the Security Council has issued three unanimous statements on Myanmar.

But Beijing, which has never recognized the existence of a coup, reduced the scope of the negotiated texts each time.

Moreover, the Security Council's positions have had little effect on the military so far.

On Wednesday, the UN's special envoy on Myanmar called for strong actions against the junta and warned of a possible "bloodbath" and the risk of civil war. 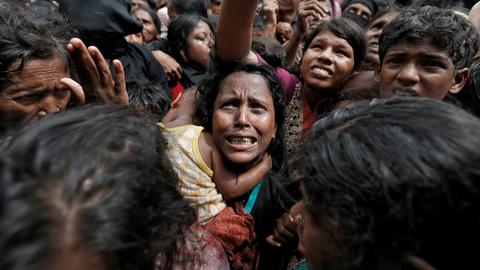