At least 120 killed as rescue operations to evacuate people stranded by flooding were hampered by landslides blocking roads, including the main highway between Mumbai and Goa.

Rescue teams in India struggled through thick sludge and debris to reach dozens of submerged homes as the death toll from landslides and accidents caused by torrential monsoon rain rose to 125.

Maharashtra state is being hit by the heaviest rain in July in four decades, experts say. Downpours lasting several days have severely affected the lives of hundreds of thousands, while major rivers are in danger of bursting their banks.

In Taliye, about 180 km (110 miles) southeast of the financial capital of Mumbai, the death toll rose to 42 with the recovery of four more bodies after landslides flattened most homes in the village, a senior Maharashtra government official said on Saturday.

"About 40 people are still trapped. The possibility of rescuing them alive is thin as they've been trapped in mud for more than 36 hours," said the official, who declined to be identified as he is not authorised to talk to the media.

Maharashtra Minister of Relief & Rehabilitation Vijay Wadettiwar said 136 accidental deaths were reported in Maharashtra up to Friday evening due to rain and other monsoon-related incidents, according to local media,

The Navy, Army and Air Force sought to evacuate people stranded by flooding, but their operations were hampered by landslides blocking roads, including the main highway between Mumbai and Goa.

Parts of India's west coast have received up to 594 mm (23 inches) of rain, forcing authorities to move people out of vulnerable areas as they released water from dams about to overflow. The hill station of Mahabaleshwar recorded its highest ever rainfall - 60 cm in 24 hours.

Water levels rose to 3.5 metres (12 feet) on Thursday in areas of Chiplun, a city 250 kilometres (160 miles) from Mumbai, following 24 hours of uninterrupted rain that caused the Vashishti river to overflow, submerging roads and homes.

Maharashtra state's chief minister Uddhav Thackeray said emergency workers were struggling to reach cut-off neighbourhoods in Chiplun, because of damage to roads and bridges there.

The Navy deployed seven rescue teams equipped with rubber boats, life jackets and lifebuoys to the affected areas, along with specialist divers and a helicopter to airlift marooned residents.

India's meteorological department has issued red alerts for several regions in the state, indicating that heavy rainfall will continue for the next few days.

Flooding and landslides are common during India's treacherous monsoon season between June and September, which also often sees poorly constructed buildings and walls buckling after days of non-stop rain.

Four people died before dawn on Friday when a building collapsed in a Mumbai slum, authorities said.

The incident came less than a week after at least 34 people lost their lives when several homes were crushed by a collapsed wall and a landslide in the city.

Last weekend, more than 30 people were killed in landslides triggered by heavy monsoon rain in and around Mumbai.

The monsoon is crucial for rain-fed crops planted during the season, but the rain often causes extensive damage and kills scores of people each year.

Experts said heavy rainfall along India’s western coast is in line with how rainfall patterns have changed in the region in past years due to climate change.

“The frequency and intensity of heavy rains has increased,” said Roxy Mathew Koll, a scientist at the Indian Institute of Tropical Meteorology in the western city of Pune.

He added that the warming Arabian Sea is driving more cyclones and more intense rainfall over short periods of time. 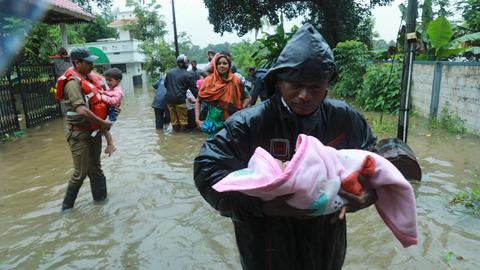