Park Geun-hye could face more than 10 years in jail if convicted of receiving bribes from bosses of big conglomerates in return for favours.

A South Korean court on Friday approved a warrant to arrest ousted president Park Geun-hye on accusations of bribery and abuse of power.

Park, who is the country's first democratically elected leader to be thrown out of office, can be held in a cell for up to 20 days while she is investigated over allegations. She is accused of colluding with a friend, Choi Soon-sil, to pressure big businesses to contribute to now-defunct foundations set up to back her policy initiatives.

A judge at the Seoul Central District Court said that "the cause and the need for the warrant are recognised as the main charges against her have been verified and as evidence could be destroyed."

Park gave about eight hours of testimony at the same court on Thursday and was held at the prosecutors' office next door while the judge studied the evidence and arguments to decide on whether to issue the arrest warrant.

On Thursday, Park, 65, arrived expressionless at the court where she strongly pleaded her case that she should not be arrested or held while prosecutors investigate the scandal.

Park argues she does not pose a flight risk and will not try to tamper with evidence.

She and Choi have both denied any wrongdoing. 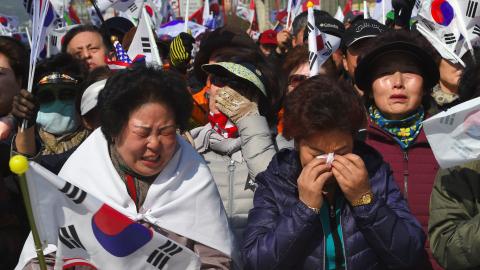