At least 11 of the 15 people killed are women, a provincial council member in the eastern city of Jalalabad, where the incident occurred, has said.

At least 15 Afghans have been killed and more than a dozen injured in a stampede in eastern Afghanistan.

Officials said the stampede on Wednesday  occurred in an open ground where thousands of Afghans had gathered to secure visas from the Pakistan consulate.

Sohrab Qaderi, a provincial council member in eastern Jalalabad city, where the incident occurred, said of the 15 people dead, 11 were women. Several senior citizens have been injured.

Two other provincial officials said over 3,000 Afghans had congregated to collect tokens needed to apply for a visa to travel to Pakistan.

Eleven of the 15 victims were women, a provincial council member said.

#AFG Sign of desperation and vulnerability of a nation. 20 years after massive international investment, there is no health care/system in place. The stampede in Jalalabad took place here in this stadium. Video shared with me. pic.twitter.com/CZV60EeRCN

Many people were trampled when they tried to exit the stadium in the city of Jalalabad, the capital of Nangarhar province, leaving 10 others injured, provincial hospital spokesperson Zaher Adel said.

"Unfortunately this morning tens of thousands of people had come to the football stadium which led to the tragic incident," provincial governor's spokesperson Attaullah Khogyani said.

The Pakistan consulate had resumed issuing visas last week after a seven month pause because of the coronavirus outbreak.

To avoid large crowds from gathering at the visa centre the applicants had been directed to a nearby football stadium in Jalalabad, Khogyani said.

Thousands of Afghans from Nangarhar and other nearby provinces had arrived since the early morning to apply for medical visas or to visit relatives.

Journalist Bilal Sarwary told TRT World that the incident shows the desperation of Afghan people who prefer becoming refugees rather than staying in Afghanistan due to violence and lack of resources. 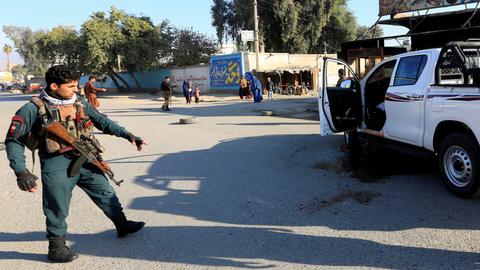 Several dead after tornadoes sweep across parts of China