Starting five days ago, demonstrations against the YPG-dominated US-backed SDF had increased in a string of towns, from Busayrah to Shuhail, in a strategic oil belt in the heart of Arab tribal territory, east of the Euphrates River.

Syrians in Deir Ezzor have stepped up protests against the YPG-dominated US-backed SDF that controls the oil-rich province after seizing it from Daesh, residents, protesters and tribal chiefs said on Sunday.

The SDF is dominated by YPG which is the Syrian wing of the PKK, recognised as a terrorist group by the US, Turkey and the EU

Protesters burned tyres along a major highway from Deir Ezzor to Hasaka that is used by tankers carrying oil, a lucrative trade the SDF took over from Daesh after defeating them in 2017.

"Where is our oil? We won't accept after today to transport our wealth outside our areas," said a banner held by demonstrators in the village of al Shanan.

Residents, protesters and tribal chiefs said convoys of tankers from the nearby oil field of al Omar, the largest under YPG control in Syria, had been turned back by local mobs angered by what they see as theft of oil from their region.

Dominated by Syrian wing of the PKK, the SDF has been the main US partner in Syria and has driven Daesh out of a swathe of the country's north and east over the last four years.

The YPG has formally declined to comment on the unrest but two officials privately told Reuters they had begun talks with tribal elders over demands from local residents that include ending arbitrary arrests.

The SDF has continued to sell oil to the Syrian regime in Damascus despite US misgivings.

It has increased shipments in recent weeks to ease acute fuel shortages caused partly by US sanctions on Iran, a main financial supporter of the Syrian government, which are hurting the Syrian economy.

By ousting Daesh from Deir Ezzor, the YPG laid its hands on some of Syria's biggest oil fields, beating the Syrian regime and its Russian backers to the prize.

The regime controls areas west of the Euphrates river that are less endowed with oil resources.

With living conditions poor and many towns without electricity, Syrians complain the YPG favours majority Kurdish areas in northeast Syria.

Reporting on the demonstrations, Syrian television showed footage of oil tankers being blocked and diverted and alleged the SDF had fired live rounds at protesters. 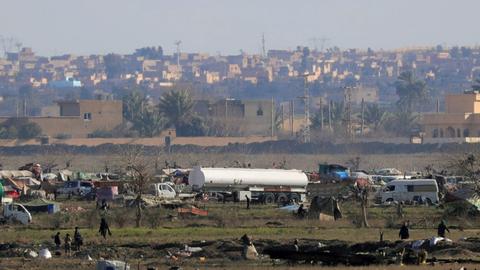