The armed group Taliban declared a three-day ceasefire in Afghanistan to mark this week's Eid al-Fitr holiday, just two days after the government blamed the insurgents for bombs outside a school that killed more than 50 people, mostly young girls.

Taliban said it would observe a three-day ceasefire in Afghanistan for the Muslim religious holiday of Eid, starting this week, after weeks of increasing violence that gripped the country.

"In order that the Mujahideen again provide a peaceful and secure atmosphere to our compatriots during Eid al Fitr so that they may celebrate this joyous occasion, all Mujahideen ... are instructed to halt all offensive operations," Mohammad Naeem, a Taliban spokesman, said on Twitter on Monday.

Eid will begin on Wednesday or Thursday this week depending on the sighting of the moon.

Taliban announced three days of ceasefire in #Afghanistan. While it's a possitive step, #Afghan people would rather see a permanent ceasefire.#TalibanLeaderMessage pic.twitter.com/l48FL4ejsh

The ceasefire declaration came two days after bombings outside a school in the western part of the Afghan capital, Kabul, killed at least 68, most of whom students, and injured more than 165 others.

No group claimed responsibility for the attack.

Taliban insurgents, fighting to overthrow the Afghan government since their ouster by US-led forces in late 2001, denied involvement in the bombings and condemned them.

Afghan government leadership said the group was behind the attack.

Naeem said the group's fighters had been instructed to cease all military operations against the Afghan government, but added they were ready to retaliate if attacked by government forces.

President Ashraf Ghani's spokesmen were not immediately available to comment on whether they would observe the ceasefire.

READ MORE: After decades of war, Afghanistan’s drug trade booms like never before

Peace talks between both warring sides in the Qatari capital, Doha, which began last year, have made no progress, and violence has risen.

Kabul has been on high alert since Washington announced plans last month to pull out all US troops by September 11, with Afghan officials saying the Taliban stepped up attacks across the country following the announcement. 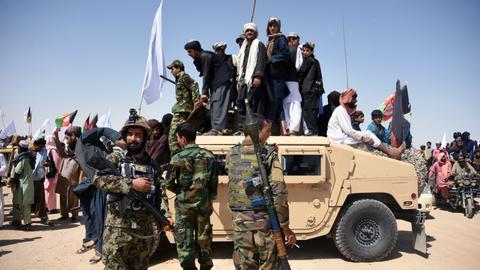