Thailand's ousted prime minister Yingluck Shinawatra says she will 'use every channel available to fight' against the order.

Thailand's former prime minister Yingluck Shinawatra said the military junta has ordered her to pay a 35 billion baht ($996.87 million) fine as a penalty for alleged corruption on her rice subsidy scheme critics say caused the loss of billions of dollars.

The scheme, which paid farmers above market rates for their rice, was a flagship policy of Yingluck's administration and helped sweep her to office in a 2011 general election. The military junta overthrew her in 2014.

"In terms of the order, it is not right and it is not just," Yingluck told reporters outside a Bangkok court on Friday.

"I will use every channel available to fight this," she added.

In addition to cases against Yingluck and senior members of her former cabinet, the junta is investigating some 850 cases related to the rice scheme, government spokesman General Sansern Kaewkamnerd said.

Many of the cases involve lower ranking public officials and members of the private sector, he said.

According to Yingluck's supporters, the cases against her are part of the Junta's plan to wipe out the influence of the Shinawatra family.

The rice subsidy programme was engineered by Yingluck's brother, former prime minister Thaksin Shinawatra, who was deposed in a 2006 coup.

"It is part for the course of the military coup which was to put down the Thaksin challenge once and for all," Thitinan Pongsudhirak, a political science professor at Chulalongkorn University, said. 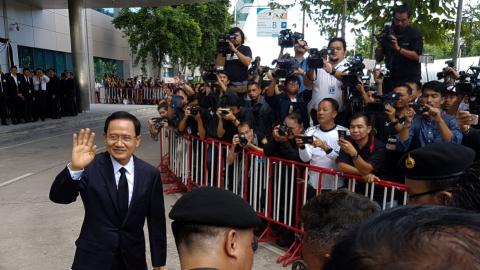