Thousands are fleeing typhoon Nock-Ten in the Philippines

Thousands of people piled onto trucks in the Philippines on Christmas Day as a powerful typhoon barreled towards the archipelago.

The typhoon weakened as it cut across the Philippines on Monday after bringing down trees and power lines, and authorities warned of flash floods and mudslides although casualties were few with police reporting two deaths.

Authorities issued warnings of destruction after storm surges up to 2.5-metres (eight-feet) high as Nock-Ten closed in on the Bicol peninsula and nearby islands.

The typhoon was packing maximum sustained winds of 185 kph (115 mph) with gusts up to 255 kph as it moved west over the ocean at 15 kmh, the national disaster agency said in its latest weather bulletin. Sustained wind was earlier 175 kph with gusts of 215 kph.

"We went around with megaphones and gave instructions to our people to eat breakfast, pack and board the military trucks," Alberto Lindo, an official of Alcala, a farming village of 3,300 people near the active Mayon volcano, said.

Nock-Ten will hit Bicol on the south of the main island of Luzon on Sunday evening, the disaster agency said. An official said preemptive evacuations in the area began on Friday, with nearly 4,000 residents moving into emergency centres and more than 8,000 others seeking shelter elsewhere.

Civil defence officials in Bicol said earlier nearly half a million people in the region were in harm's way and needed to be evacuated.

Rescue teams gave priority to about 100 babies, toddlers, parents and elderly people in the evacuation process. They were moved to a school that is some seven kilometres (four miles) away.

All ferry services and commercial flights in Bicol were suspended.

After hitting Bicol, Nock-Ten is forecast to strike the heavily populated heartland of the main island of Luzon including, the capital Manila.

On Sunday, the coastguard ordered the beaches south of Manila to be cleared of holidaymakers by Monday, while residents of the island were warned to leave their homes.

Rescue workers on the island have been put on standby, evacuation centres opened and food and other rations have been stocked. 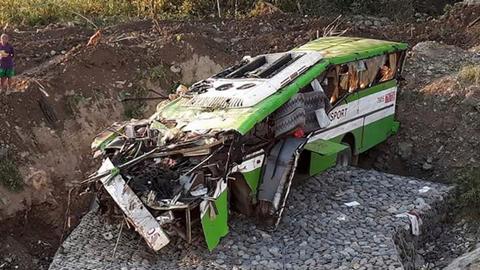 At least 19 people killed after Philippines bus plunges into ravine