Veteran activists led the solemn gathering which wove its way from the commercial heart of Hong Kong Island to China's liaison office, with some marchers in tears.

Thousands took to the streets of central Hong Kong on Saturday night holding candles as they marched in memory of pro-democracy Chinese dissident Liu Xiaobo.

Veteran activists led the solemn gathering which wove its way from the commercial heart of Hong Kong Island to China's liaison office, with some marchers in tears.

Liu's ashes were buried at sea on Saturday, depriving supporters of a place to pay tribute following his death on Thursday from cancer while in custody on the mainland.

Hong Kongers have already held memorial events, but Saturday's was by far the largest.

It came the day after four pro-democracy legislators were disqualified from Hong Kong's parliament, worsening fears that freedoms in the semi-autonomous city are under serious threat from an ever-more assertive Beijing.

"Loving a country is wanting it to make progress," said marcher Emily Chau, 24.

"But this is how he was treated for being so loyal to the country."

"With the disqualification of the lawmakers yesterday, it's like this place is decaying," she said.

The city is ruled under a "one country, two systems" deal granting it freedoms unseen on the mainland, guaranteed in the handover agreement when colonial power Britain returned Hong Kong to China in 1997.

But Beijing stands accused of increased interference in a range of areas, from politics to media and education

Marchers of all ages carried floral wreaths and white chrysanthemums, bowing three times in front of a makeshift memorial to Liu outside the liaison office, a traditional sign of respect at funerals.

Some brought their children and grandchildren with them.

Among the crowds was Lam Wing-kee, one of the five Hong Kong booksellers known for publishing salacious titles about Beijing politicians who vanished and resurfaced in the mainland in 2015.

Lam was allowed back to Hong Kong last year on condition that he pick up a hard disc listing bookstore customers and return.

Instead he skipped bail and went public to tell an explosive story of how he was blindfolded by mainland police after crossing the border, and interrogated for months.

He has since attended a number of rallies in the city.

Lam said he had been saddened by the news of Liu's death but would not lose hope for the future of Hong Kong.

"If the time frame you look at is too short, it will be pessimistic," he told AFP.

"It's not enough just to see what's in front of you."

Steven Wong, 45, had travelled from Singapore to attend the march, saying he had respected Liu for many years.

Wong was born and grew up in Beijing and was a high school student there in 1989, the year of the brutal crackdown on pro-democracy protesters in the city's Tiananmen Square.

He said he remembered burned-out tanks and blood smeared on lamp posts the day after. Shortly afterwards his family moved to Singapore.

"He was a great scholar who woke up young people, especially of my generation,"Wong said of Liu.

"He made me think deeply about what we can do as a Chinese (person) and what we can teach our students," said Wong. 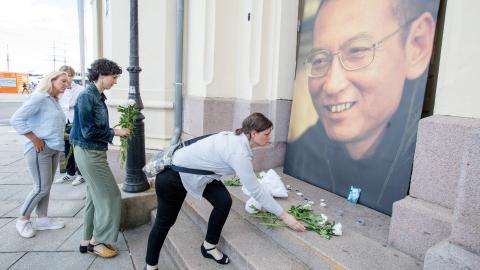