UN High Commissioner for Human Rights Michelle Bachelet says the Digital Security Act, under which opposition figures were arrested, needs to be overhauled, urging immediate release of those in jail.

UN High Commissioner for Human Rights Michelle Bachelet has called for a review of a digital security law used against opposition figures in Bangladesh.

“There needs to be an overhaul of the Digital Security Act under which Ahmed was charged, and all those detained under this Act for exercising their rights to freedom of expression and opinion must be released,” Bachelet said.

Bachelet also urged the government of Bangladesh to ensure its investigation into the death in custody of writer Mushtaq Ahmed is prompt, transparent and independent.

“The government must ensure that its investigation into Ahmed’s death is prompt, transparent and independent, and that any allegations of ill-treatment of other detainees are also immediately investigated,” Bachelet said

Ahmed was detained in May under a tough digital security act that opponents say undermines freedom of speech after he criticised the government's handling of the coronavirus pandemic.

Jail authorities said Ahmed died on Thursday after passing out at a high-security jail outside of Dhaka.

He had not been suffering from a major illness, according to prison chief Mohammad Ghiasuddin.

The High Commissioner also expressed serious concern at allegations that another man detained on similar charges, cartoonist Ahmed Kishore, has been subjected "to torture or other ill treatment."

What is the controversial digital security law?

Bangladesh saw another day of protests on Sunday following the death of the prominent writer, with police firing tear gas and rubber bullets.

Bangladesh's Parliament passed the Digital Security Act, DSA, in late 2018 after several major instances of deadly sectarian violence sparked by posts on social media, but the wording is vague and its provisions broad.

It criminalises engaging in "propaganda" against the "spirit" of the 1971 Bangladeshi war of independence, the national anthem, the flag and the nation's founder Sheikh Mujibur Rahman, father of the current prime minister.

Those falling foul of the law face hefty fines and lengthy jail sentences, even life imprisonment for certain repeat offences. Arrests can be made without a warrant.

How often is the law used?

Last year at least 10 editors of national and regional dailies and online news platforms faced legal charges under the DSA following critical reporting on leaders of the ruling Awami League party, according to Amnesty.

Others falling foul include people like Ahmed, a successful crocodile farmer who became a vociferous critic of the government.

He was arrested in May along with several others including rights campaigner Didar Bhuiyan and Ahmed Kabir Kishore, a cartoonist.

According to rights group Article 19, which monitors press freedom in many countries, "freedom of speech, freedom of expression and freedom of the media are being severely violated under the Digital Security Act."

Rights groups say arrests have increased since the coronavirus pandemic.

A firm hand at the wheel

Bangladesh's Prime Minister Sheikh Hasina, 73, has ruled the country with a firm hand since coming to power in 2009 in a landslide election victory.

She has used her power to settle some old scores, with several army officers accused of killing her father and much of her family in 1975 executed.

At least five Muslim leaders and a senior opposition leader have also been executed for war crimes.

Rights groups raised questions about the fairness of the trial.

Hasina's main political opposition has been hobbled, with thousands of its activists behind bars on what they say are trumped-up charges.

Her ailing arch-rival Khaleda Zia was jailed for corruption charges that the opposition says are politically motivated.

Last March she was let out for medical treatment.

Hasina was easily re-elected in 2014 and 2018, and both votes were clouded by allegations of irregularities.

The government denied the claims and a court ordered the programme removed from the internet.

READ MORE: Protests in Bangladesh reveal the deep insecurity of the government 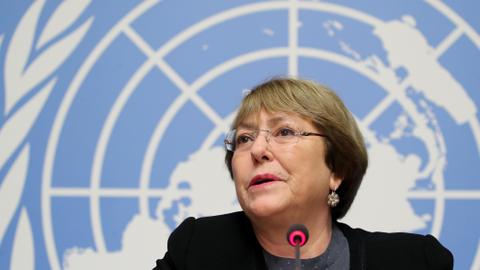