US trade with Japan not fair and open, Trump says

"The US has suffered massive trade deficits with Japan for many, many years. So we will have to negotiate and we will do this in a friendly way," US president says.

President Donald Trump lashed out Monday at the US trade relationship with Japan, saying it was "not fair and open", as he prepared for formal talks with his Japanese counterpart.

The US president said he would push for more reciprocal trade with Washington's close ally - but in a friendly way.

He was speaking in Tokyo on the second day of a 12-day Asian trip expected to be dominated by North Korea and trade.

"We have to do more. The United States has suffered massive trade deficits at the hands of Japan for many, many years," Trump said at the start of a meeting with Japanese business leaders.

"We have to negotiate," he said, adding it would be done in a friendly manner.

Trump also said Washington wants to make the United States the most attractive place to hire, invest and grow.

"We want free and reciprocal trade, but right now, our trade with Japan is not free and it's not reciprocal, but I know that it will be," he said.

Japan had a $69-billion trade surplus with the United States last year, according to the US Treasury Department.

The US leader, who met Japanese Prime Minister Shinzo Abe on Sunday for golf, lunch and dinner, will hold a more formal summit with Abe later on Monday.

In the second round of economic talks in Washington last month, US Vice President Mike Pence and Japanese Finance Minister Taro Aso, who doubles as deputy premier, failed to bridge differences on thorny trade issues.

The two sides remain at odds over how to frame future trade talks, with Tokyo pushing back against US calls to discuss a bilateral free trade agreement (FTA).

Trump also said that an Indo-Pacific trade framework would produce more in trade that the Trans-Pacific Partnership pact pushed by his predecessor but which he announced Washington would abandon soon after he took office.

"TPP was not the right answer," he said, adding he knew not everyone in his audience agreed. "We will have much bigger trade with the way we are doing it right now and it will be a much less complex situation."

The 11 remaining nations in the TPP, to which Japan's Abe is firmly committed, are edging closer to sealing a comprehensive free trade pact without the United States.

Trump would "certainly be open" to meeting with North Korean leader Kim Jong-Un, he said in an interview broadcast on Sunday.

Asked by journalist Sharyl Attkisson, host of the "Full Measure" TV show, whether he would ever consider sitting down with "the dictator," Trump said he was holding meetings with numerous Asian leaders.

"I would sit down with anybody," he said. "I don't think it's strength or weakness, I think sitting down with people is not a bad thing.

"So I would certainly be open to doing that but we'll see where it goes, I think we're far too early."

Trump's conciliatory-sounding comment came after months of fiery rhetorical exchanges between the two leaders, prompted by a series of internationally condemned nuclear and missile tests by the North. 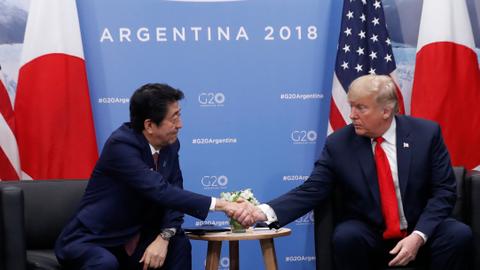