Boeing on Monday replaced its embattled chief executive, Dennis Muilenburg, saying a change was necessary as it attempts to restore its reputation amid the protracted 737 MAX crisis.

Boeing named board Chairman David Calhoun as chief executive and president, saying the company needed to "restore confidence" and "repair relationships with regulators, customers, and all other stakeholders."

The company pledged to "operate with a renewed commitment to full transparency, including effective and proactive communication with the FAA, other global regulators and its customers."

The aerospace giant's financial picture remains clouded following the global grounding of the MAX in March after two deadly crashes.

The move comes a week after Boeing took the monumental step of temporarily shutting down MAX production because of the crisis, which has pushed the aircraft's return to the skies into 2020.

Muilenburg will exit the company immediately but Calhoun, a former General Electric aviation executive, will not take the CEO post until January 13, 2020, while he exits existing commitments, Boeing said in a news release.

During that period, Chief Financial Officer Greg Smith will serve as interim CEO.

Muilenburg's response to the crisis has been increasingly criticised as the MAX grounding has dragged on far longer than initially expected as more disturbing details have dribbled out about the certification of the MAX.

He has also been seen as tone-deaf and awkward towards families of the 346 people killed in the crashes.

After enduring two withering congressional hearings in the fall, Muilenburg's leadership came under further scrutiny this month when the Federal Aviation Administration called the company out for overly-optimistic timeframe for restoring the MAX that the agency said created the perception that Boeing was trying "to force FAA into taking quick action."

The company took another hit to its reputation over on Sunday when its Starliner spacecraft landed six days early after a failed mission to rendezvous with the International Space Station. 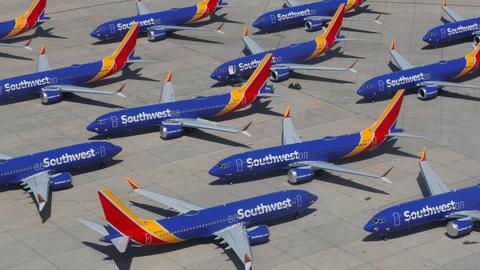