Pressure is growing on the HNA conglomerate after a debt-fuelled $50 billion buying spree that has seen its credit rating downgraded by Standard & Poor's.

HNA had "stopped paying – via their owned airline subsidiaries – some lessors for leased jets for the past two to three months," Aergo CEO Fred Browne was quoted as saying.

"We only have one aircraft exposed, but I know others have a lot more," Browne told FlightGlobal. "If those lessors turn around and say 'no more' and pull those aircraft out, that could truly shake the market."

Its financing costs have risen as repayments come due, and ratings agency Standard & Poor's last week downgraded its credit assessment due to its "aggressive financial policy" and tightening liquidity.

"We value our relationships with lessors and we are committed to meeting our obligations to them,” a spokesman for HNA Group said.

The rating agency cut the rating of Swiss airport services group Swissport on Tuesday due to the weakening outlook for parent HNA.

The conglomerate's Chief Executive Adam Tan told a conference in Beijing last week that the company was considering asset sales.

Headquartered in the southern Chinese island of Hainan, HNA started out as a regional airline. Among its other investments, it owns a group of mostly Chinese air carriers, including Hainan Airlines and Beijing Capital Airlines. It also has stakes in some foreign carriers such as Brazil's Azul SA.

Uncertainty shrouds the owners the privately held company and some international banks have scaled back their dealings with the firm due to its opaque ownership structure.

The debt pile at Chinese firms is climbing, with levels at the end of September growing at the fastest pace in four years, according to a Reuters analysis. 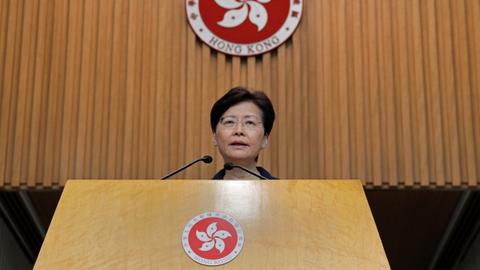 Hong Kong leader sees 'way out' of chaos through dialogue