UAE's Foreign Minister Sheikh Abdullah bin Zayed Al Nahyan during his visit to Moscow says it is important to maintain the stability of energy and food markets in the wake of Ukraine conflict.

Russia's military operation in Ukraine has drawn a raft of Western sanctions and disrupted global energy markets, putting a spotlight on Gulf energy exporters, such as the UAE and Saudi Arabia, as consumers look for supplies to replace Russian oil.

OPEC producers Saudi Arabia and the UAE have so far resisted US pleas to use their spare production capacity to help contain oil prices, saying they are committed to an output pact under the OPEC+ alliance, which includes Russia.

"It is important to maintain the stability of energy and food markets," the Emirati minister told a televised joint press conference with his Russian counterpart Sergey Lavrov.

"We welcome all mediation efforts in the Ukraine crisis ... the UAE is ready to engage with the parties to strengthen opportunities for a peaceful resolution," Sheikh Abdullah said.

The UAE, whose relations with security ally the United States have been strained, has tried to walk a line between the West and Russia, with which it has also deepened ties. It abstained in a recent UN Security Council vote, vetoed by Moscow, condemning the Russian incursion into Ukraine.

Sheikh Abdullah said he would also discuss Iran, Syria and Iraq during his talks in Moscow.

Russia appeared this week to have backed off its previous view that Western sanctions were an impediment to salvaging the 2015 nuclear pact between global powers and Iran just as a deal appeared close at Vienna talks.

While Gulf Arab states have voiced support for the talks, they have also urged global powers to address regional concerns over Iran's ballistic missiles programme and network of proxies, including in Yemen, Iraq and Lebanon. 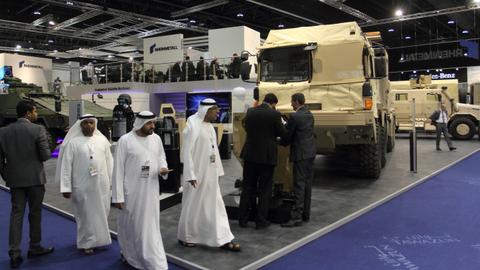 Russia is selling more weapons to Saudi Arabia and the UAE