The exit poll shows the Socialists are set to win between 45 and 49 percent of the vote.

Albania's Socialist Party looked set to win Sunday's parliamentary vote, an exit poll showed, which would give the ruling party a mandate to push judicial reforms vital for membership of the European Union.

Both the Socialists of Prime Minister Edi Rama and the rival Democratic Party led by Lulzim Basha are seeking a majority as neither party won the 70 seats needed for a majority in the 2013 or 2009 election.

The exit poll by Italy's IPR Marketing, with a margin of error of two percent, showed the Socialists are set to win between 45 and 49 percent of the vote, which could secure them more than half of the seats in parliament.

"The Socialist Party might have won more than 71 seats (in the 140-seat parliament), but this is still an opinion not a certainty," IPR Marketing's Antonio Noto said.

Both main parties want to ditch the Socialist Integration Movement (SIM) of president-elect Ilir Meta, which gained the role of king-maker by propping up their respective governments for the last eight years.

The state election commission extended voting by an hour to 1800 GMT due to a low turnout as temperatures reached as high as 39 degrees Celsius, making it the hottest day so far this year.

But at 8 pm when polls closed turnout was around 44.90 percent, the lowest this century.

"The ideas of neither candidates for prime minister convinced those Albanians who make the difference so they did not turn out to vote," said Ylli Manjani, a former justice minister sacked by Rama a few months ago.

The vote is being closely watched by Albania's European neighbours, keen for it to leave behind a history of election irregularities and violence.

The Interior Ministry said in a statement hundreds of cases of vote buying and intimidation of voters had been reported, but gave no further details.

Thousands of Muslims, who make up 60 percent of the population, recited prayers in the newly-built pedestrian square in central Tirana early on Sunday to mark the end of the holy month of Ramadan.

"I expect a radical change, a better future for the Albanians so they don't emigrate throughout the world," Tirana resident Petrit Sulo said after casting his ballot.

Voting across much of the Balkan country was peaceful. However, the Socialists and the SIM party, coalition partners for the last four years, accused each other of cases of voter intimidation, vote buying and violence among their backers.

The two front runners have said they will jointly ask the EU to advance towards accession. They have not said whether they might rule together in coalition.

Since taking office, the Socialists have improved tax collection and boosted the performance of the electricity sector. Economic growth accelerated to 3.45 percent last year, compared with 0.97 percent in 2013.

But they failed to fulfil promises to create 300,000 new jobs and secure free health care for everyone aged over 40. The country's international reputation was tarnished by data showing Albania had become Europe's biggest open-air cannabis producer.

Basha, a foreign-educated former transport and interior minister, accuses Rama of glossing over Albania's problems with "facades and palm trees" and says he has neglected the economy.

Implementing a sweeping judicial reform aimed at rooting out widespread graft will be a priority for the next government as it seeks progress towards joining the European Union.

Rama said last month Albania could get a green light for formal EU talks to start at the end of this year. 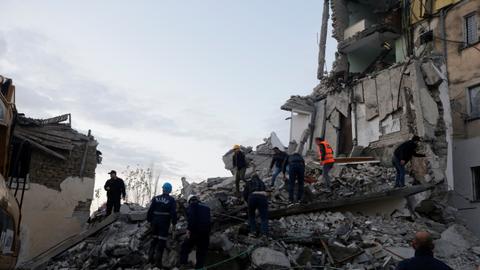