Turkey says it is tired of EU "hypocrisy"

German Foreign Minister Frank-Walter Steinmeier expresses concern over Ankara's post-coup measures and says it is up to Turkey to decide whether to advance its bid on joining the European Union.

Turkish Foreign Minister Mevlut Cavusoglu said on Tuesday his country was "fed up" with the "condescending" attitude of the EU in accession talks, while his German counterpart expressed concern to Ankara about its post-coup crackdown.

Relations between Ankara and Brussels have been especially strained since a failed coup in July. At least 240 people were killed and around 2,200 others wounded while resisting the putsch.

Addressing a joint press conference after holding a meeting with his Turkish counterpart in Ankara, German Foreign Minister Frank-Walter Steinmeier said, "The question of whether Turkey goes closer to, or further away, from Europe is not a decision for Europe or the European capitals but should be made in Turkey."

Turkey's accession effort dates back to the 1960s.

The German foreign minister said he did not support halting accession talks with Turkey. He added that his conversation with Cavusoglu had "not been easy" and admitted the pair had expressed "divergent views" about the measures Turkey has put in place following the coup attempt.

But Steinmeier insisted that Ankara should not see criticism from Berlin as "being lectured or disrespect for its sovereignty" because it was in the interest of long-term relations between the two sides.

Cavusoglu, on the other hand, said Turkey was "fed up" with the condescending attitude of the European Union in talks over its application to join the bloc. "We don't deserve this attitude. So, like Frank-Walter said before, we will ask our people (about EU accession) and they will decide."

He said that the Turkish people would decide whether or not to reinstate the death penalty, a decision that could spell the end of Turkey's accession bid.

The Turkish foreign minister added he was tired of what he described as the "two-facedness and double standards" of the European Union.

The comments came a day after Turkish President Recep Tayyip Erdogan warned the EU to decide by the end of the year on the membership bid, threatening to otherwise call a referendum on the process.

Steinmeier said he was "to say the least irritated" by repeated criticism from Erdogan accusing Germany of harbouring wanted Kurdish militants.

"We condemn each form of terrorism, that from Daesh as well as terrorism by the PKK. I think that we are both of the opinion that in the end there must be a political solution, that terrorism cannot be eliminated using military force alone, that a return to the political process must be found. For this to happen, the PKK must of course refrain from carrying out attacks and must lay down their weapons."

Talking on the subject, Cavusoglu said, "If (according to our information) there are cases against 4,500 PKK supporters (in Germany), this would mean that there are at least 4,500 terrorists in Germany. We don't know how those cases ended even though we did ask. Secondly, we asked for the extradition of PKK members. So far, only three of them have been extradited. They didn't extradite the others." 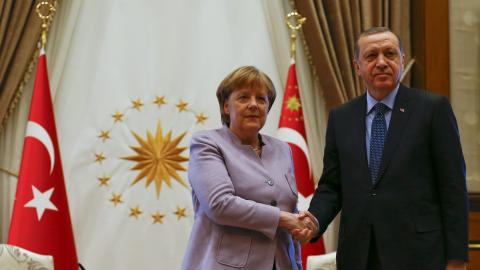 Merkel and Erdogan discuss coup attempt in Turkey and counterterrorism