Another arrest in London attack as third attacker is named

The man was the thirteenth person to be arrested from London's Barking area in connection with the London attacks that left seven people dead. The third attacker was named and it emerges he was also known to authorities.

British police revealed the name of the third attacker and announced they had taken another person into custody in the investigation into the London terror attack on Tuesday, a day after saying they had released without charge all 12 people arrested so far.

"A 27-year-old man was arrested under the Terrorism Act at approximately 8:05 am (0705 GMT)," the police said, adding that the arrest took place in Barking, the east London suburb that has been the focus of police raids since Saturday's attack.

More details were not immediately available.

Late on Sunday, three attackers drove south across London Bridge, mowing down pedestrians before stabbing bystanders in the nearby Borough Market area.

The attacks that came less than a week before parliamentary elections left seven dead, including foreign nationals, and dozens injured. At least 18 were reported to be in critical condition.

As police announced the arrest, they also released the name of the third attacked in involved in Sunday's attack. Youssef Zaghba, it appears had been known by authorities.

According to Italy's Corriere della Sera newspaper Zaghba had been stopped at Bologna airport in 2016 when trying to fly to Syria via Turkey, and Italian authorities had identified him as as a potential "foreign fighter" and tipped off Britain about his movements.

The second attacker was named as 30-year-old Rachid Redouane, who police said claimed to be Moroccan and Libyan. He also went by the name Rachid Elkhdar with a different date of birth.

Both lived in the east of London.

"However, there was no intelligence to suggest that this attack was being planned and the investigation had been prioritised accordingly," police said. 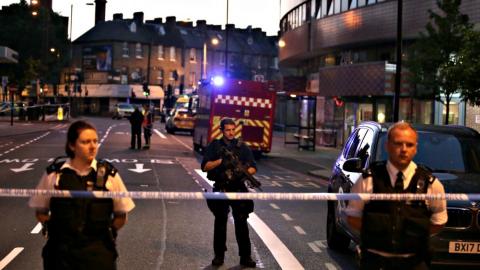 One dead, 10 injured after van hits worshippers near London mosque