The Burmese politician and Nobel Peace Prize winner has been slammed for her silence amid Myanmar’s genocide of Rohingya Muslims, while Orban is a fierce critic of Islam and Muslim migration to Europe.

Nobel Peace Prize winner Aung San Suu Kyi has become a pariah in recent years over her lack of action and silence over Myanmar’s persecution of its mainly Muslim Rohingya minority.

But there appears to be at least one Western leader willing to court her support — Hungary’s populist Prime Minister Viktor Orban.

The pair have seemingly found common ground, sharing concerns over migration and the ‘growing Muslim population’.

A Hungarian government statement issued on Wednesday included pictures of the two greeting each other with gleaming smiles during a meeting in Budapest.

The issue of illegal immigration was at the top of the agenda, according to the official release.

“At the meeting the two leaders highlighted that one of the greatest challenges at present for both countries and their respective regions – South East Asia and Europe – is migration,” the statement said.

“They noted that both regions have seen the emergence of the issue of coexistence with continuously growing Muslim populations.”

Hungary was a key transit route for refugees and migrants trying to reach northern Europe during the refugee crisis, although few decided to stay there.

Myanmar is home to native Muslim minorities, such as the Rohingya, who have roots in the country dating back centuries and does not experience significant inward migration.

Despite having a tiny Muslim population of less than half a percent, Orban is one of Europe’s most vociferous critics of Islam and advocates halting Muslim migration.

The right-wing leader of the Fidesz party, has repeatedly asserted his intent to defend the ‘Christian’ character of Europe, as well as preventing Hungary from becoming a ‘mixed race’ nation.

Myanmar’s dealing with its Muslims has been much more severe.

The UN has described the mass killing of Rohingyas as ‘textbook genocide’, with more than 700,000 fleeing Myanmar for Bangladesh in the most recent wave of violence in 2017.

Rather than condemn the violence targeting the minority, Aung San Suu Kyi has instead blamed both sides for the violence and has refused to be drawn into condemnation of the Burmese military.

The lack of action on her part has resulted in a fall from grace in Western states, where she was previously lauded for her pro-democracy activism.

Universities, including her own alma mater, have stripped her of honours, as have municipal councils, human rights groups, and governments.

In November last year, Amnesty International stripped the Burmese politician of its highest honour, the Ambassador of Conscience Award.

Amnesty International’s Secretary General Kumi Naidoo wrote: “Today, we are profoundly dismayed that you no longer represent a symbol of hope, courage, and the undying defence of human rights.

“Amnesty International cannot justify your continued status as a recipient of the Ambassador of Conscience award and so with great sadness we are hereby withdrawing it from you.”

Despite far-right lurch, Hungary’s Fidesz rides high in Europe and at home 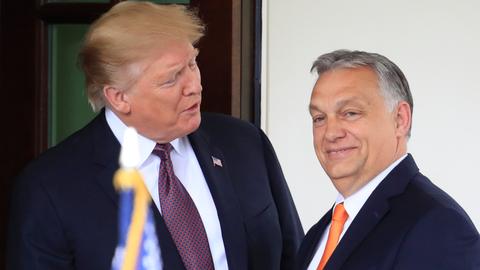 Why Hungary’s Viktor Orban has fans in the US Congress