The alleged video scandal puts the government in crisis, with Chancellor Kurz dismissing the far-right interior minister. Now the far-right wants to vote against their former partner. Can the ruling party survive the backlash?

The far-right and anti-Muslim Freedom Party of Austria (FPOe) announced its support last Saturday for a vote of no confidence against Chancellor Sebastian Kurz from the centre-right People’s Party (OeVP).

"It would be almost naive of Kurz to assume that we [FPOe] have no mistrust of him after the mistrust of Kurz against us," the resigning far-right Interior Minister Herbert Kickl said.

The minister is known for coining derogatory and anti-Muslim slogans such as “Home instead of Islam” and “More courage for our Viennese blood”.

On Monday evening, Chancellor Kurz announced that he would propose the dismissal of Kickl to Federal President Alexander Van der Bellen.

Kickl and the FPOe, he said, did not have the "necessary sensitivity" in dealing with the purported video which shows the FPOe Leader and Vice Chancellor Heinz-Christian Strache offering 'government contracts' to a supposed Russian oligarch's niece.

In response to Kurz's move, all FPOe ministers resigned and withdrew support from the OeVP-led government.

The Social Democrats hold the key

It remains to be seen when a vote of no confidence will be held. The small opposition party Jetzt (Now), with seven seats (out of 183) in the Federal Parliament, has already announced that it will submit a motion for a special session of the National Council, which could possibly take place next Monday.

The FPOe (51 seats) and Jetzt (7 seats), however, do not have a majority to push the motion through. The deciding factor is therefore the Social Democrats (SPOe), with 53 seats. They have already positioned themselves against Kurz, hoping to see the entire government replaced by experts in the political crisis.

"Only such a step would be a ‘good and sustainable solution’,” said SPOe Leader Pamela Rendi-Wagner on Monday in Vienna.

Kurz, on the other hand, had announced that only the ministerial positions of the FPOe that would now become vacant would be filled with experts and top civil servants. In this way the Chancellor said, he wants to ensure stability and the ability to act at the European level by the planned election day in September.

The government crisis in Austria was triggered on Friday by a video from 2017 published by the German media outlets Sueddeutscher Zeitung and Der Spiegel. The six-hour video - of which only minutes are publically available - shows, among others illegal party donation plans, the wish to buy Austria’s biggest newspaper and statements including, “Journalists are the worst wh*res”, by Vice Chancellor and FPOe Leader Strache. The politician has had to resign - but remains a party member. At a meeting in Ibiza, he promised an alleged Russian oligarchic niece public contracts, among other things, if she would help the FPOe to succeed in the 2017 national elections. 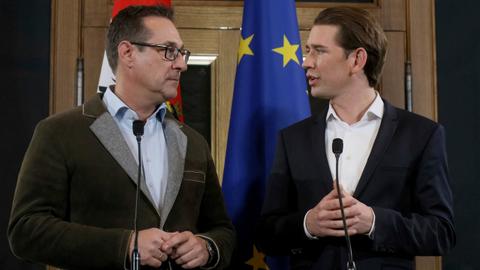